People often write off Boston as unambitious in its culinary options—but those people haven’t spent time in Cambridge. A hub of educational institutions and cultural centers, the city plays host to a cosmopolitan audience—and a diverse, vibrant food scene to match. In 2015, Boston magazine published an article about the dramatic change that has occurred in the Cambridge food scene, and the “top-tier gastronomic getaways” one can find there now. There’s truly something for everyone in Cambridge—from the standby burger joints that dot the city to the new places serving healthy vegan food and crispy, craveable falafel. Here’s our roundup of the best of the Cambridge food scene. 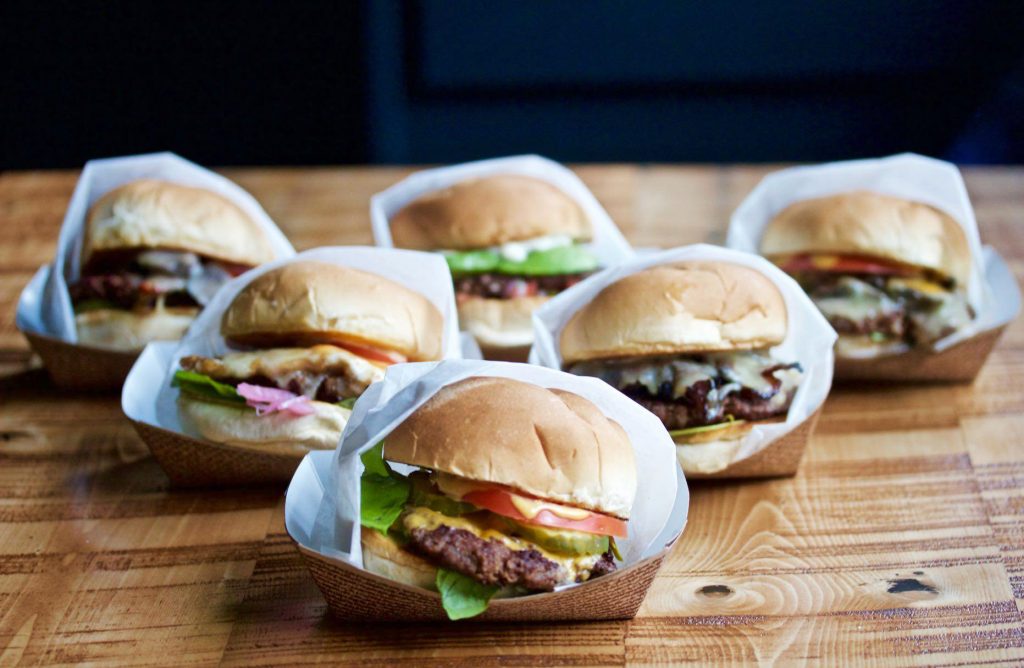 If there’s one dish that has long defined the Cambridge food scene, it’s the burger—specifically, no-nonsense, pub-style burgers that go classic all the way, with lettuce, pickles, onions, and a fat slice of cheese. Catering spots specializing in the burger are accessible and affordable for college students, while delivering that elemental pleasure that anyone can love.

Originally a popular truck in the Cambridge food scene serving hefty, diner-style beef burgers, Mainely Burgers opened a brick-and-mortar location in 2016, launching a catering menu to go along with it. Choose between the classic burger bar, or Mainely burger bar, which offers a few more premium topping options, like the restaurant’s signature sweet-and-smoky maple mayo, or the house sauce with ketchup, mustard, dill, and paprika. 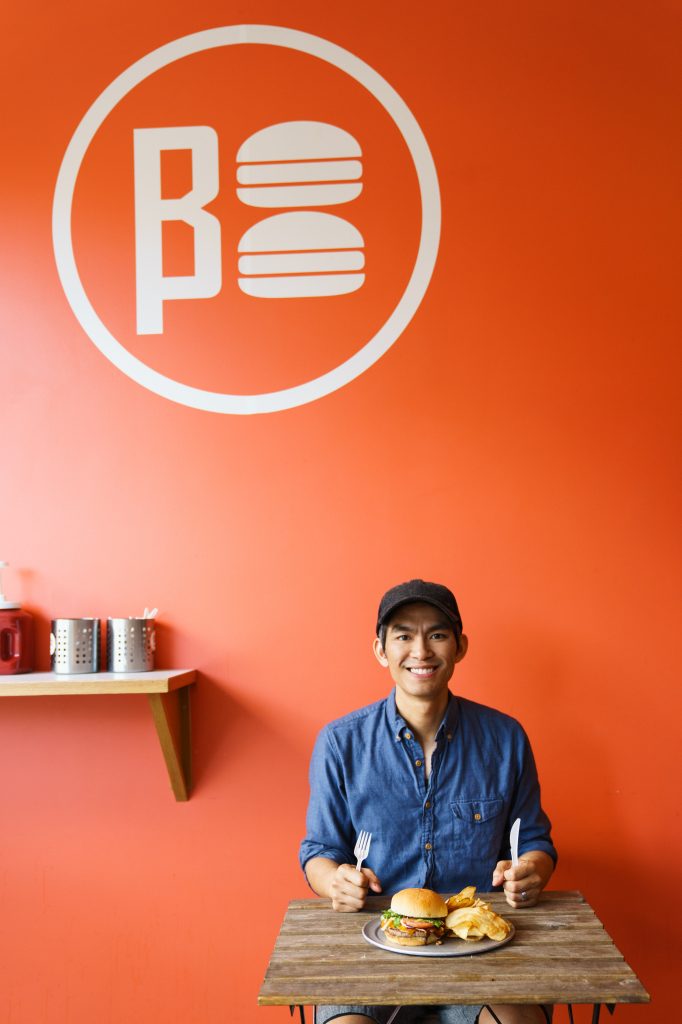 The most innovative burger joint of the Cambridge food scene, Beta Burger’s concept is based on using technology to provide a superior burger experience. That means using a process similar to sous vide (cooking meat in water in a vacuum-sealed bag), which ensures the meat stays super juicy and tender without all the excess fat. Guests can choose between 65 different burger variations, but of course, since it’s Cambridge, the most popular catering option is the classic burger bar—complete with all the usual suspects: lettuce, onions, ketchup, mayo, and American cheese. 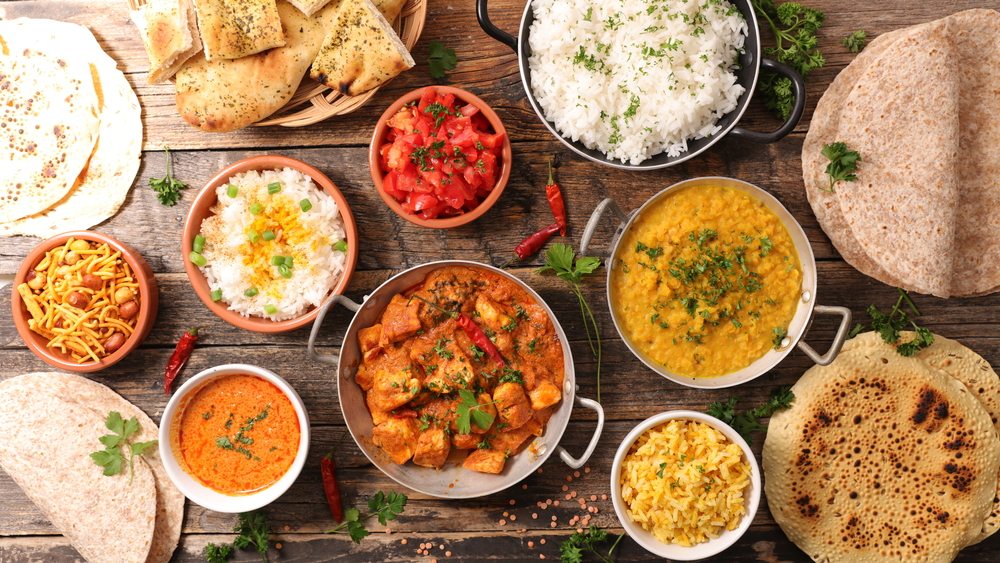 Thanks to the city’s robust Indian population, the Cambridge food scene has always been home to a variety of authentic Indian restaurants—offering everything from anglicized classics like chicken tikka masala to more hyper-regional dishes from areas like Punjab and Goa. And everyone from students to families still can’t seem to get enough of it.

This festive Cambridge-food-scene standout focuses on Punjab—the region of India traditionally associated with tandoor-style cooking (and the hometown of Nirvana’s chef Paramjit Singh). Accordingly, the dishes to get here are those that have been kissed by the smoky powers of the Indian-style grill—like the tandoori chicken, or chicken skewers that have been marinated in yogurt for extra tenderness, or even the naan—which arrives pillowy-soft and with the option of fillings like potatoes and onions. To offset all those grilled dishes, it’s important to go big on refreshing condiments like raita, or spiced yogurt; mango chutney; and a briny pickle made of assorted vegetables.

A staple in Cambridge’s food scene and situated in bustling Central Square, Dosa Factory provides Indian food for everyone—flavors of the North and South, meat-heavy and veggie-heavy dishes, and some great bread and sweet options as well. It’s hard to go wrong with appetizers like paneer pakoras—deep-fried cubes of cheese—plus an order of the ever-popular garlic beef, and a southern-inspired Kerala fish curry, laced with coconut and chilies. Top it all off with chapati—a homestyle wheat bread that’s ideal for sopping up sauces—and a cardamom-infused rice pudding called kheer. 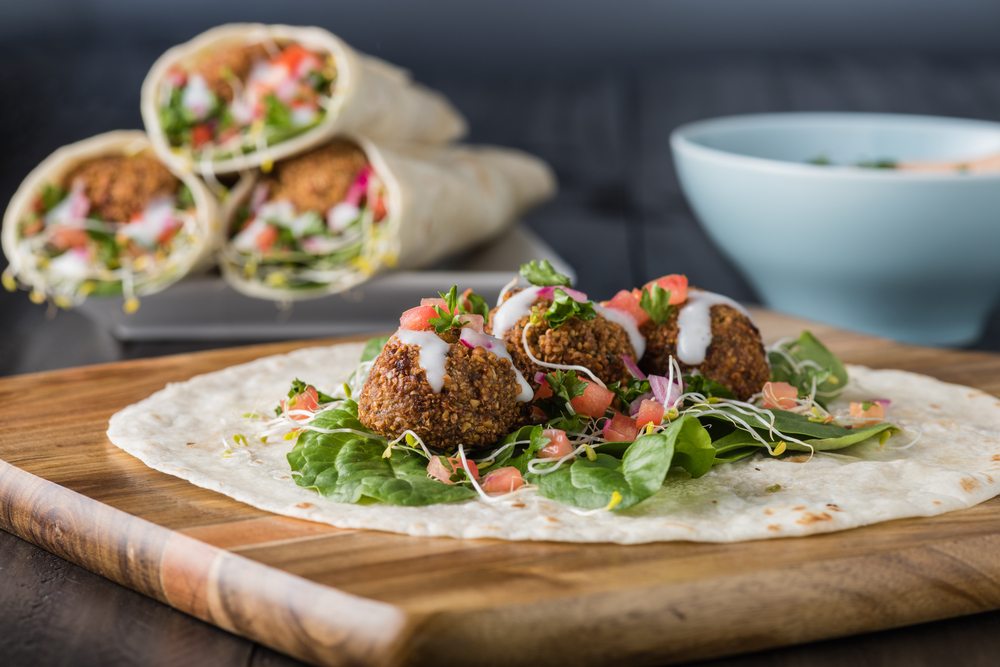 Middle Eastern cuisine has been established as one of the biggest trends in food not just in Boston, but across the country. People can’t seem to get enough of the richly spiced and bright flavors of countries like Greece, Iran, and Israel. “Mediterranean cuisine is also on the rise right now because it’s a healthier choice,” points out Ahmed Naguib of Falafel Corner. But one of the biggest micro-trends to come out of the Middle Eastern boom is the rise of falafel spots in the Cambridge food scene—places serving up crisp-on-the-outside, moist-on-the-inside chickpea fritters accompanied by all kinds of colorful relishes and sauces.

This spot in the Cambridge food scene has earned a loyal following for its unique focus on eastern Mediterranean food—dishes that honor the African slant of the region, like the aromatic Moroccan beef stew, tajine, or couscous tfaya, made with caramelized onions and raisins. While the dishes are flavorful enough on their own, it’s worth getting an order of tahini—a sesame seed-based sauce that adds a refreshing touch—as well as the restaurant’s homemade hot sauce.

The slogan for Falafel Corner is “Best Falafel in Cambridge” and in this case, the food lives up to the hype. The space may be small, but the falafel packs a punch in bright, complex flavors—thick-crusted fritters seasoned heavily with parsley, cumin, and coriander (a great option for a Lunch & Learn). But the falafel is not the only reason to hit this Cambridge food scene spot. People adore the Cairo Salad, a bowl of greens lifted up by the addition of herbs like parsley and mint, as well as the basma, a sweet, nut-and-cheese-filled dessert with buttery, flaky layers. 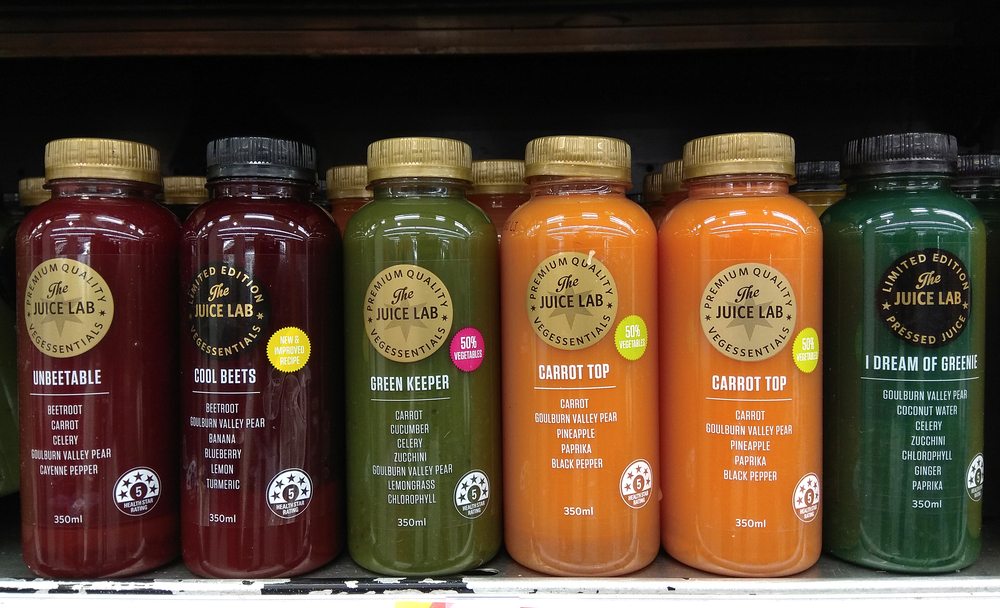 Once popular during the major health craze of the ’90s, thanks to the rise of cold pressing and superfood ingredients like kale among young people, juice bars are making a huge comeback around the Cambridge food scene—serving not only healthy, organic juices but raw snacks and healthy treats targeted to the post-workout crowd. “Fresh juice is on the upswing, combined with an overall increase in mindfulness about nutrition and food consumption,” says Scott Rawdon of Nu Café in Cambridge. “Fresh juices are a fun way to get the vitamins and minerals found in fresh fruits and vegetables, not to mention they are delicious.”

Liquiteria is most well known for inventing the now-ubiquitous cold-pressing technique—a means of extracting juice from fruits and vegetables without getting rid of their powerful nutrients. Since then, the spot has become a popular destination for health-obsessed residents in the Cambridge food scene looking to grab an afternoon pick-me-up or start a multi-day juice cleanse. There are over a dozen juices to pick from. The most popular All Greens Juice features kale, spinach, romaine, parsley, celery, and cucumber. The spicy Killer XX Juice is a blend of apples, lemon, ginger, and a hit of cayenne. Liquiteria is also a great spot for ordering a healthy breakfast for your team—whether it’s a veggie-packed egg muffin or an açai bowl blended with strawberries and almond butter. 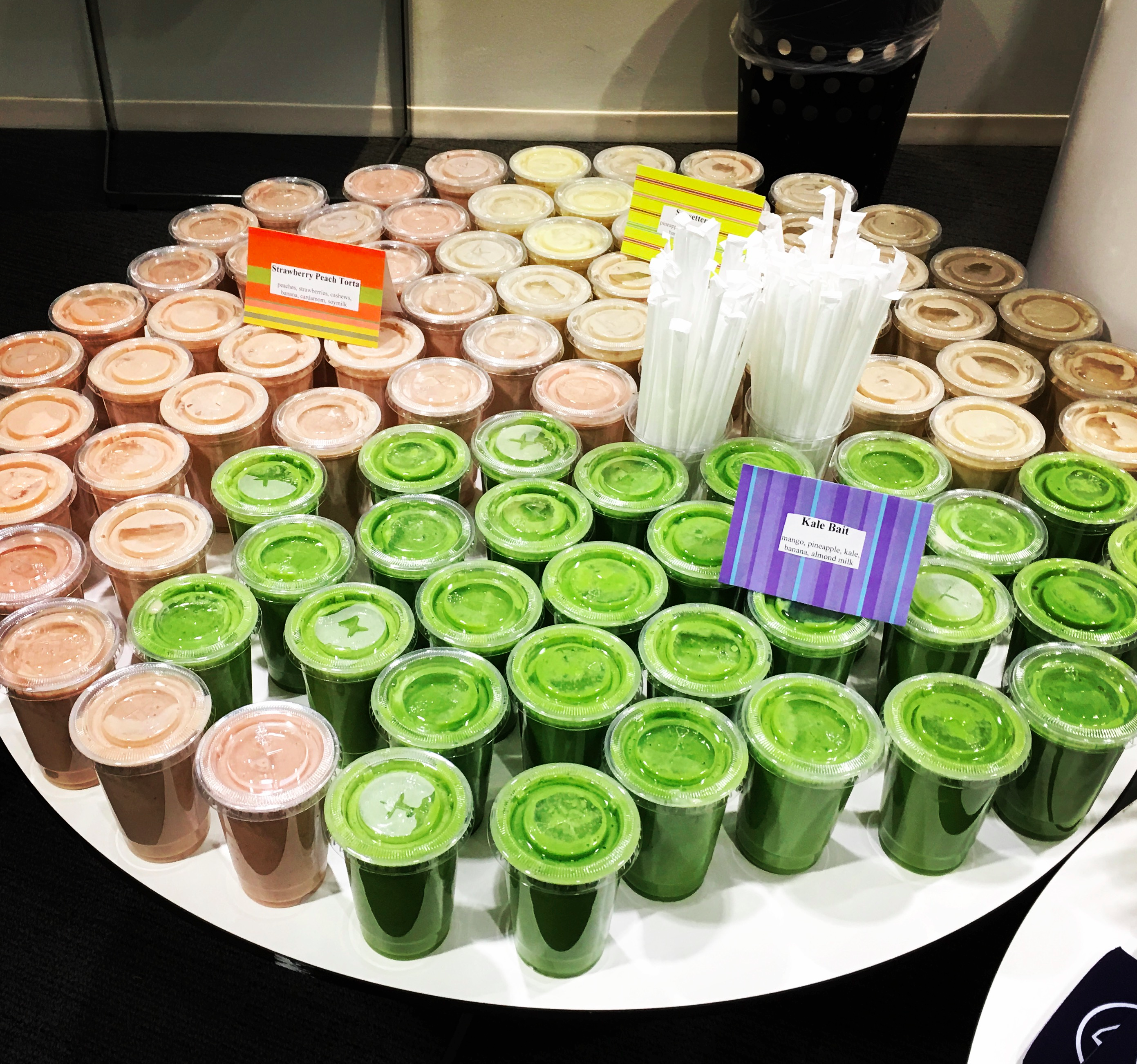 Known for its colorful, creative offerings and plant-based mantra, The Juice Union is on a mission to serve up simply great juice within the Cambridge food scene—without any of the add-ons that often come with juicing. “Juice and smoothies are a delicious way to incorporate nutritious fruits and vegetables into a diet,” says Diana Krefetz of The Juice Union. “In our grab-and-go lifestyle, getting a fruit-and-vegetable-based drink is a healthier alternative to the standard fast-food options.” The most popular of all the offerings at Juice Union is the purple-hued Roots & Fruits juice, a mildly sweet and earthy concoction with carrots, beets, apples, celery, and ginger. You can even get your juice in “party pack” form for big groups. And for snacking: add on some of The Juice Union’s bit bites—raw, all-natural truffles made of ingredients like ginger, pecans, almonds, and cashews. 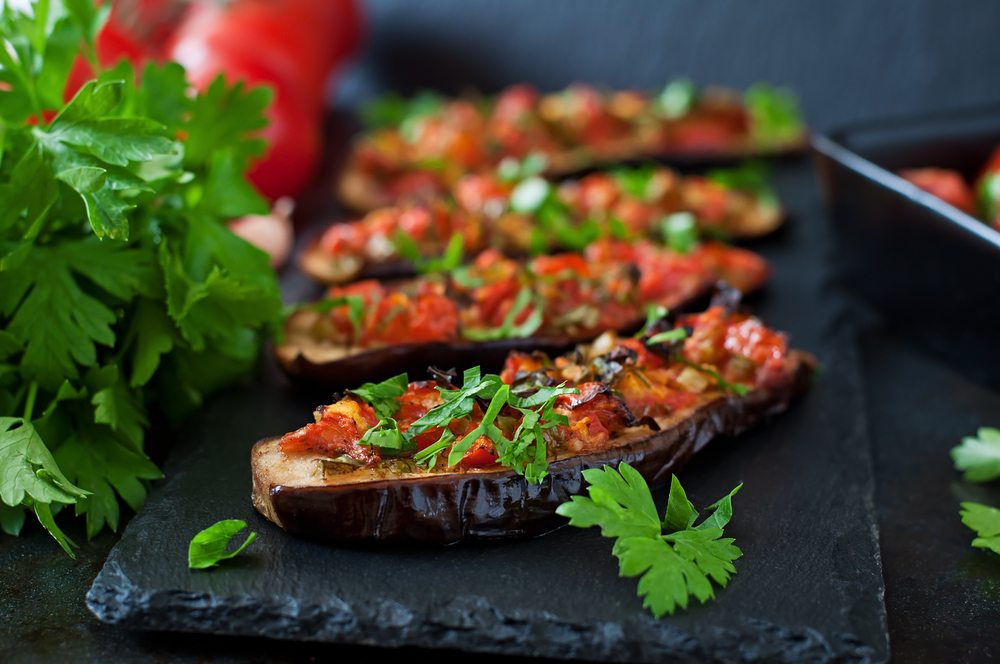 As juice bars make their big comeback, so have spots either exclusively dedicated to vegan cuisine or with a big focus on vegan eats. Harvard’s publication Harvard Magazine published a story last year about the mainstreaming of vegan culture on campus and in the Cambridge food scene. Walking down Mass Ave. these days, it’s almost impossible not to see a spot advertising its vegan offerings, whether that means meatless burgers, dairy-free smoothies, or cashew mac and cheese.

The intense fandom toward this standby of the Cambridge food scene is real. For years, it has been a destination for quick-serve food that’s conscious of your health, and the planet. There are three catering packages, each of which includes your choice of the restaurant’s ever-popular, nutrient-packed bowls and salads, like the the Goddess Bowl, with tofu, brown rice, carrots, and beets, or the Sufi Poet Salad, with red-lentil hummus, cranberries, cashews, and cucumbers. Equally popular as the bowls is the wide range of smoothies, all of which are vegan. Get the most-ordered Spring Alive Smoothie—which doubles as a healthy dessert—with blueberries, strawberries, pineapple, mango, spirulina, coconut ice cream, chia, and almond milk.

Piggybacking on the perennial popularity of Indian food in the Cambridge food scene, Surya Indian Kitchen goes a step further: offering a wide variety of Indian dishes with an emphasis on healthier, vegan options with no cream, no ghee, and no meat. Choose between the cleverly named packages like Freshman Entrant and Sophomore Student, which include a choice of vegan entrées like chana dal (lentils), and aloo baingan (potatoes and eggplant), plus basmati rice, naan, and a spicy Indian pickle.

Want to read more about what’s happening in the Cambridge food scene? Take a look at our roundup of the