Everyone knows Philadelphia as the home of the Liberty Bell and Constitution Hall, but as a culinary destination it is often overshadowed by New York and Washington, D.C. But the Philadelphia food scene is finally getting the attention it deserves, stepping out as much for its place in US history as for its current incarnation as an affordable hub of culinary innovation. From great sandwiches and cheesesteaks to new vegetarian and noodle shops, Philadelphia is making its mark as a hub of food innovation. 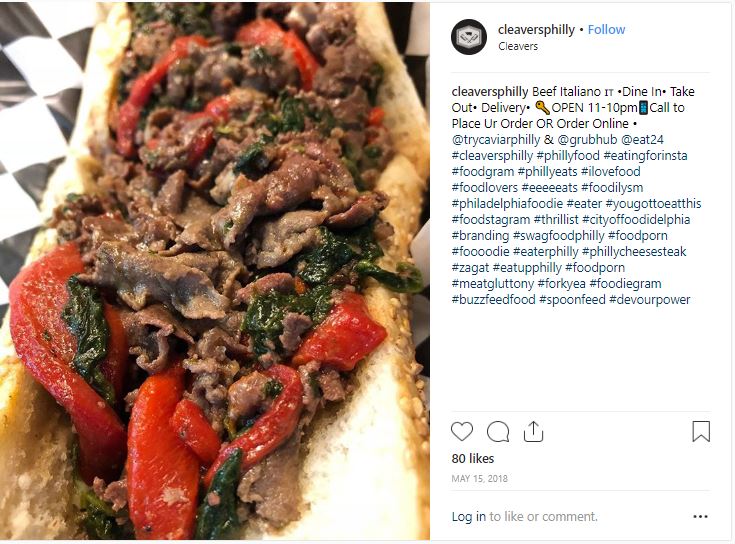 Everyone in Philadelphia has an opinion about classic Philadelphia eats but there is no dispute when it comes to the most iconic dish in town: cheesesteak. “For better or worse, people leave this town and know cheesesteak,” says Ari Miller, chef at Lost Bread Co. Located within blocks of each other in South Philly, Geno’s Steaks and Pat’s King of Steaks attract visitors in search of the classic sandwich, on an Italian hoagie and smothered in onions and Cheez Whiz. Up in Rittenhouse Square, Cleavers updated the cheesesteak shop, adding new ingredients and defiantly serving up its cheesesteaks on a sub roll rather than the heritage Italian hoagie.

Meat plays an important part in another sandwich, the pork roll. Brought to Philadelphia by intrepid New Jerseyans, the pork roll is a traditional breakfast sandwich, served on a Kaiser roll with eggs and cheese. You can find it at John’s Roast Pork. Scrapple, thought to have originated with the region’s Pennsylvania Dutch community, is another local favorite. Trimmed meat and ends from other pig parts are mixed with cornmeal and flour to form a sort of loaf. It is often cut and fried with eggs for a hearty breakfast. It is an anchor on the Philadelphia food scene.

Tenaya Darlington, a Philadelphia food and drinks writer and cookbook author, credits the city’s deep Italian working class roots for these heritage dishes. “People come to the city to eat oysters and drink a heritage cocktail like the Clover Club (it’s served at the Olde Bar),” Darlington says. But what defines Philadelphia food in Darlington’s mind? “Carbs,” she says. “We are a sandwich town, a pasta town, and an incredible bread and bakery town.”

Fermentation Has Everyone Talking

The art of transforming yeast into flavor has taken the Philadelphia food scene by storm. Around town, fermenters of all stripes, from brewers to bakers, have set up shop. Martha, a new bar in the Kensington neighborhood (just to the west of Fishtown), hired a fermentation director to oversee the countless products produced there. There is kombucha on draft, pickle plates, and sour beer in casks. Earth Bread and Brewery, in the Mount Airy neighborhood of Philadelphia, is recognized as much for its flatbread as for its beer (the restaurant keeps bar hours, not bakery hours). Brewpubs, like 2nd Story Brewing in Old City, where the beer is made upstairs from the restaurant, are popping up all over town. 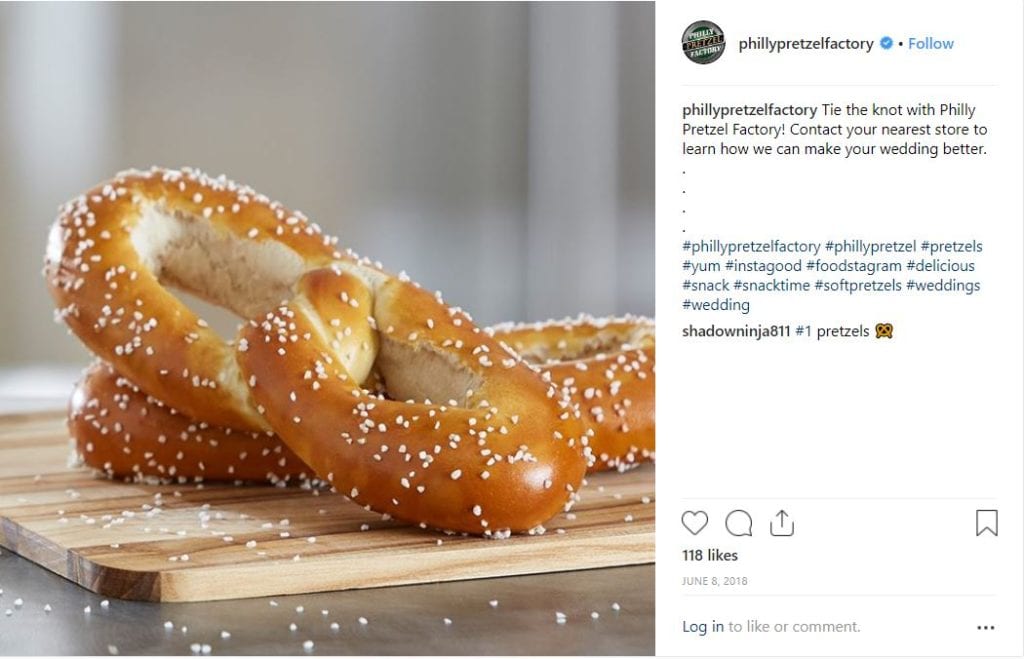 As the fermentation movement has taken hold, makers are re-examining everything from the hoagie roll to the pretzel. High Street on Market built an all-day cafe supported by an in-house bread and pastry program. The bread trend of the moment, pretzel shortbread, can be found at Lost Bread Co. Unsold soft pretzels are recycled with plenty of butter to make a hybrid that has never been seen before. “People go nuts for it,” says Darlington.

Ari Miller of Lost Bread Co. also developed a new style cheesesteak, one he designed for friends and chefs that reimagines the classic. A Lost Bread Co. hoagie roll layered with Primal Supply grass-fed chipped beef and Hidden Hills butterkäse, the dish is an instant classic. “There is a collective desire here for good trashy food for when you don’t want fine dining,” says Miller.

Vegetarian and Vegan Restaurants Are Happening

Vedge, a vegetable restaurant, established the trend when it opened in 2011 in the Center City neighborhood, raising the bar on what vegetarian food could be. Since then, countless other vegan and vegetarian restaurants, hi, lo, and in between have opened. V Street, Vedge’s vegan spin-off, recently opened in Rittenhouse Square. HipCityVeg opened two locations in the city and the 100 percent vegan restaurant called Charlie was a sinner. brought together strong drink with a menu aimed squarely at veg-heads.

The Philadelphia Food Scene: What to Eat by Neighborhood

Situated on the Delaware River, just north of Center City, Fishtown is, perhaps unsurprisingly, where fish was once sent to be smoked and processed. Now a nightlife hub, the neighborhood hums with countless beer halls, distilleries, ice cream shops, and pizza parlors. Stock, a Southeast Asian BYO (see more on BYO below), serves a well-edited menu of curries, pho, banh mi, and salads. Fette Sau, another Stephen Starr restaurant, serves up plenty of barbecued meat, all smoked in-house, with picnic tables as the primary form of seating. Frankford Hall (yep, Stephen Starr is involved) serves up German-American fare such as schweinshaxe (pork shank) and bratwurst (there’s a vegetarian Impossible Burger to be had, too) and plenty of beer to wash it down. Or check out Pizza Brain, a restaurant so serious about pizza, it includes a museum dedicated to what it calls “pizza culture.” (They also make the regionally famous tomato pie.)

The community near the Penn campus that stretches along Baltimore Avenue between Forty-Third and Fiftieth Streets is known for its array of food trucks (check out Whirly Pig for its foie gras PB&J) and its spirit of diversity and openness. Stop in for Senegalese at Youma, Laotian at Vientiane Cafe, or modern soul food at Booker’s. Pakistani, Ethiopian, and a new wave of Mediterranean and Middle Eastern restaurants are also to be found here.

BYOs are a big part of the Philadelphia food scene. A workaround for chefs and restaurateurs who choose not to navigate the byzantine workings of the state’s liquor laws, BYOs, or Bring Your Own restaurants, is code for “no alcohol sold on premises.” Darlington confirmed that every neighborhood has them, but East Passyunk, a neighborhood just south of Center City, is filled with BYOs that are great for a date. “There’s a little square where men sit next to a fountain and play dominos,” she says. And there is a farmer’s market. Perla serves up modern, locally inspired Filipino fare while Laurel‘s intimate feel and refined French cuisine comes in a seven-course tasting menu format. 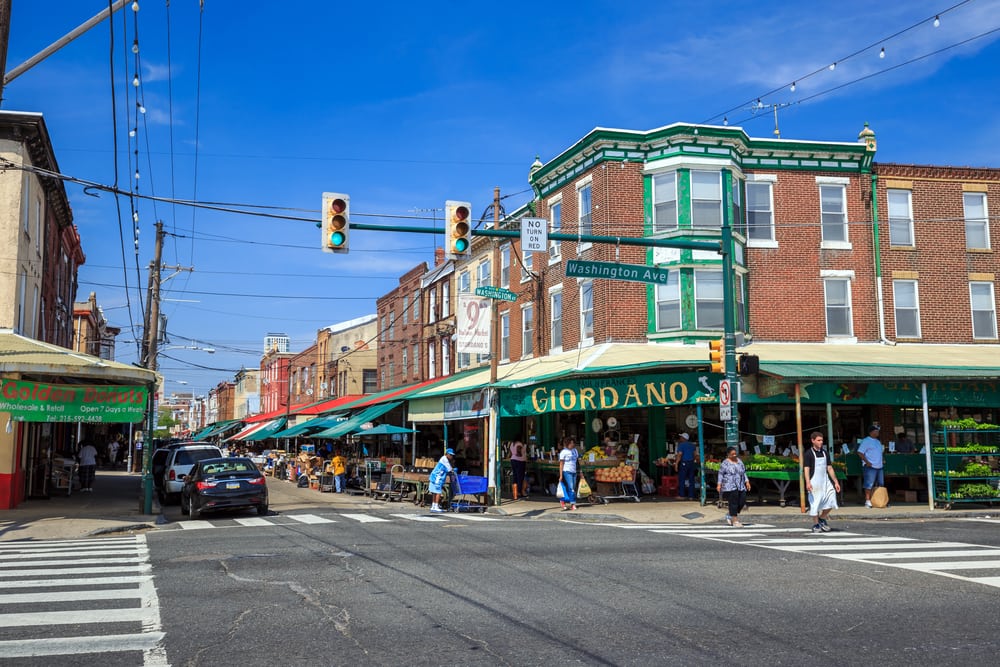 Squeezed in between East Passyunk and Center City is the vortex of Philadelphia’s Italian food scene. A stretch of South 9th Street has been home to an Italian marketplace for over 100 years. “This is the neighborhood where the little old ladies with their thick black shoes shop for the ingredients for tonight’s dinner,” says Darlington. It’s a neighborhood where vendors hand cut a wheel of Parmesan to order and the aroma of fresh spices wafts on the air. The Italian Market remains a neighborhood food hub. It is home to Isgro Pastries and Termini Bros. Gold Medal Pastry where cannoli is made while you wait “and the cannoli ladies will correct your pronunciation of ‘ricotta,’” says Darlington. Newer immigrant groups are adding fresh flavor to the Philadelphia food scene. Grab fresh-pressed tortillas at Tortilleria San Roman or just-made falafel at Al Zaytouna. 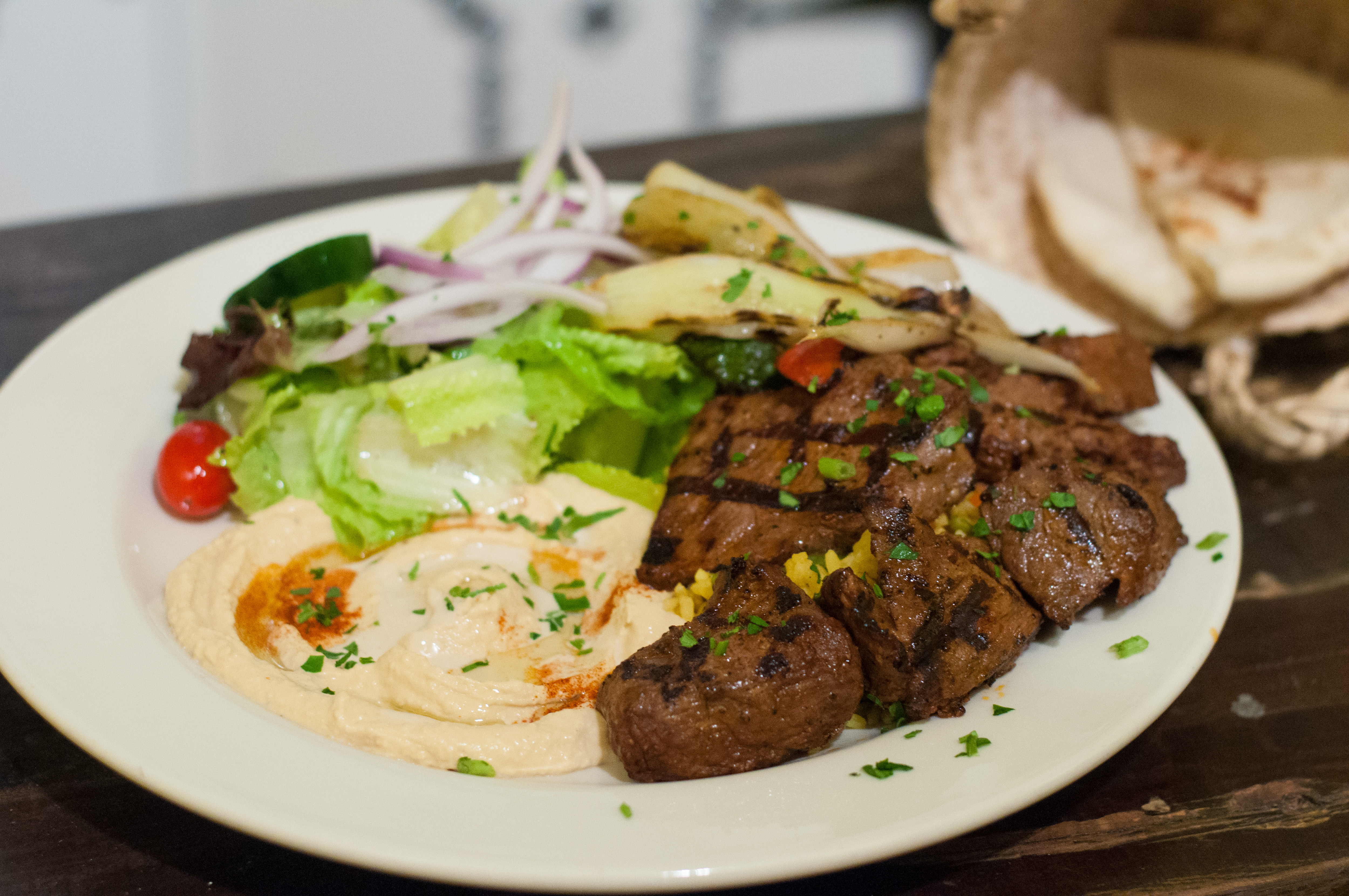 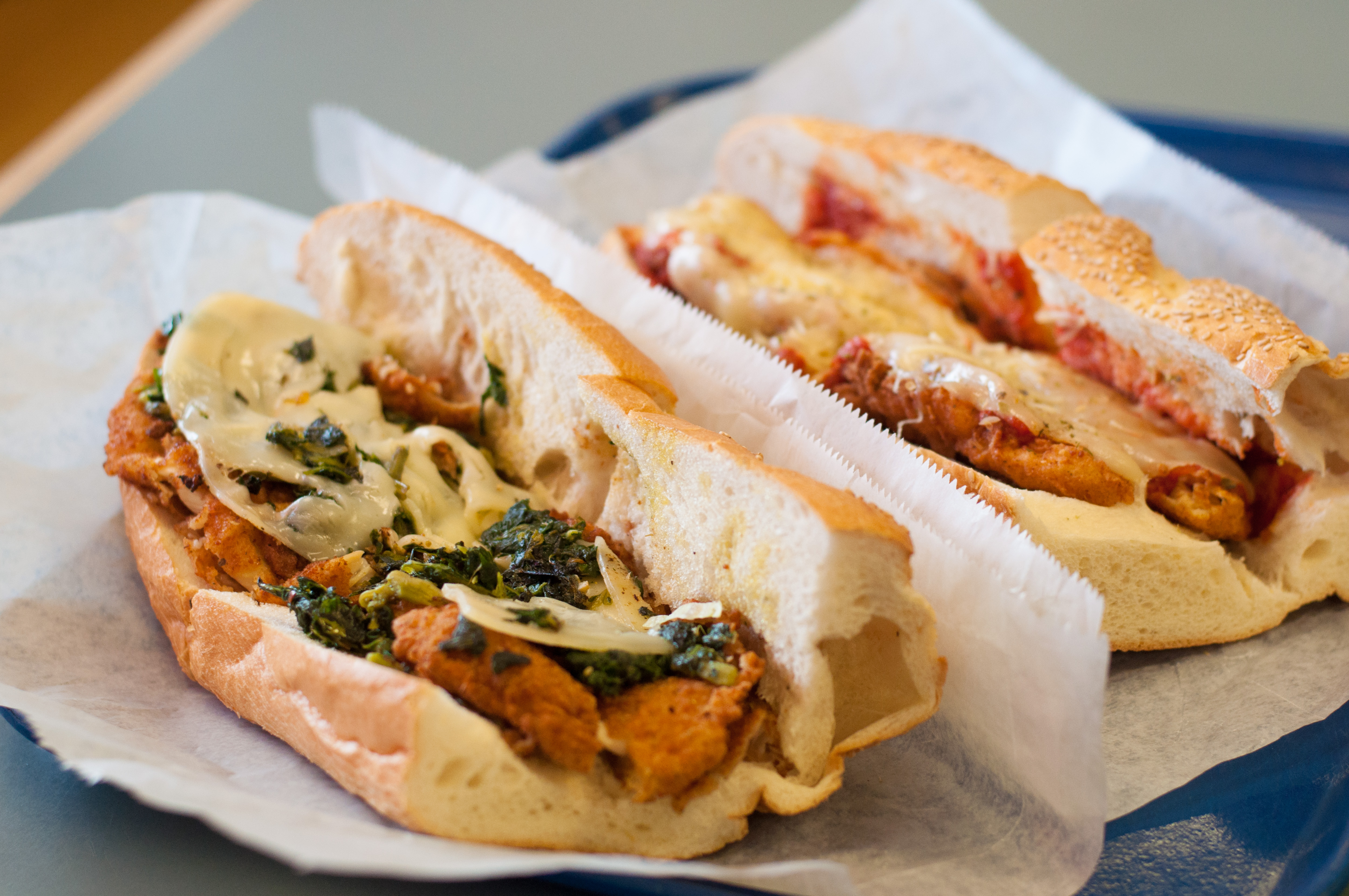 Hoagies. Not subs. Not hero, grinder, or po’ boy. In Philadelphia, a sandwich layered with meat and cheese is a hoagie. Sure, the hoagie originated with Italian immigrants but this iconic sandwich pushed to the realm of the revered when Rocky ate one in the eponymously named movie. Try a classic hoagie at Slack’s Hoagie Shack or the Philadelphia Box Lunch.

Though the tomato pie originated to the east of the Delaware (that’s Jerseyside, people), Philadelphia has taken this hyper-local style of pizza to heart. Instead of sauced tomato, this pizza is layered with hand-crushed whole tomatoes, giving the pizza a more rustic look. Find it at Pizzeria Pesto or try another hyper-regional pizza trend, scrapple pizza, at Rustica. Wood-fired pizza in the Neapolitan style is popping up all over Philly. Spuntino makes Neapolitans in countless iterations.

Talk to any Philadelphian about their favorite cheesesteak and the importance of a specific type of bread or cheese to the integrity of the sandwich comes into play. “When I was a kid, if your cheese steak was not on an Amoroso roll, that was cheating,” says Miller. Classic interpretations are to be found all over town, from Charley’s Philly Steaks (where it’s made with white American cheese) to Del Rossi’s Cheesesteak Co. (where you pick the cheese).  Or try the latest cheesesteak to roll into town at Whiz Kid. Seitan stands in for the chopped meat and rutabaga wiz for the “cheez.” No word on the roll used.

Another trend that shares heritage with the state to the east, roast pork sandwiches are a Philadelphia standout. Try one at the original Tommy DiNic’s at the Reading Terminal Market or go new school at Paesano’s where whole roasted suckling pig parts are topped with broccoli rabe, Italian long hots, and sharp Provolone.

Amish cooking has long influenced the region’s cuisine and Lancaster County, to Philadelphia’s west, could be called the heart of Pennsylvania Dutch country. Reading Terminal Market hosts numerous shops that feature produce, meat, and dairy from Amish farms. And a traditional doughnut, the apple dumpling doughnut, is a great jumping off point to experience the flavors of this heritage community. Try it at Dutch Eating Place.

The Philadelphia restaurant scene has expanded to include all sorts of trends. Find out more about what’s driving the Philadelphia food scene or dive in on Philly’s food truck and cheesesteak scenes.