Food trucks are, perhaps, the most essential form of a food business. And they’re central to the Philadelphia catering scene. As Entrepreneur notes, food truck growth is exploding, outpacing overall commercial food service. Dump N Roll catering, a relative newcomer to Philadelphia catering — and the food truck scene — is crafting flavorful, multi-ethnic dumplings and rolls. All the while, they’re taking the food truck business model to a new place, driven by a passion for supporting the community.

“Our concept is to make dumplings into an art,” says Peter Tong, owner and operator of Dump N Roll catering. “Our main drive is to bring that multiethnic theme in a portable, convenient package. The dumplings roll in a creative way.”

Tong is classically trained in French cuisine, but also worked in Japanese, Chinese, and Italian restaurants before he launched Dump N Roll catering. He looked first to Philly’s iconic cheesesteak (along with other favorite American dishes like burgers and pizza) in the hopes of building dumplings and rolls with cultural resonance within the busy Philadelphia catering scene.

Dump N Roll catering hits the nail on the head, garnering accolades for dishes like the traditional Crispy Tofu Pad Thai Spring Roll and a Vietnamese-inspired “Villy” Chzsteak  Spring Roll or the Far West Wonton (stuffed with tempura bacon cheeseburger and smoky barbecue sauce). The multicultural approach to developing flavors and dishes means Dump N Roll’s menu has broad appeal. And, most of the menu is designed for ease of use. Everything is made in convenient, pre-portioned sizes and easy, hand-held appetizers or entrees. 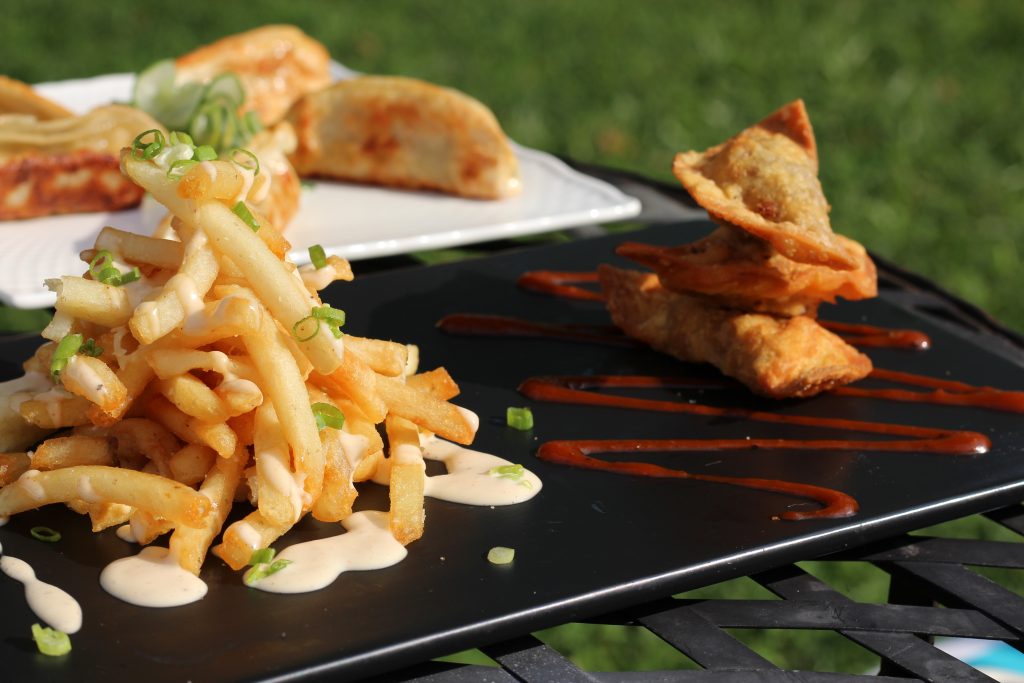 Power to the People

Creating great food is only part of Tong’s creative mission for Dump N Roll. Tong is using his popular food truck business as a vehicle to “empower and inspire the seeds (children) of the future towards a path of unlimited possibilities.” Tong did not arrive at this place in life easily. He grew up in a resource-poor North Philly neighborhood. Growing up, it was never really his intention to go into the food business.

“I really did not know what I had to do,” says Tong.

But he credits his cousin, Dom Calafati, with coming up with the business plan while Tong was still in high school. “He sowed the seed,” says Tong.

But it was not until Tong heard his calling — mid-prayer at a particularly low point in his life — that he realized something was resonating on a higher level. Part of that meant using his work to provide support and meaning for the children of tomorrow.

“I want to impact them through education, through love, through anything that can impact them positively when they come from a background like mine,” says Tong.

As part of his business model, Tong collaborates with charitable organizations. But his ultimate goal is to take Dump N Roll catering to the next level. He wants to create a food chain that is philanthropy-based.

After almost three years in business, Tong is building elements of the philanthropic mission outlined in his initial business plan. To start, he began working with Jesus Children Fellowship and the Magnum Foundation, supporting these organizations with food donations as well as his own time. Tong also donates catering to charitable events and fundraisers that are important to the community.

His next steps include opening a full-service restaurant to be called Dump N Roll Factory, tentatively scheduled to open in late autumn 2018. And then, this inspiring Philadelphia catering business will change to a B Corp (a for-profit company certified by the nonprofit B Lab to meet rigorous standards of social and environmental performance, accountability, and transparency). And they will have the tools and time in place to hire, coach, and train team members who might be overlooked by other companies.

“We want to make sure we stand by our values and make a true collaboration of using media and outreach to make this happen,” said Tong.

What Should You Order From Dump N Roll?

So now that you know the story behind the dumplings, it’s time to actually try some. While, the Philadelphia catering scene is already booming, any type of event could benefit from the energy and cross-cultural good vibes of Dump N Roll. Here’s some of the best of the best:

It’s really hard to go wrong with the Dump N Roll menu, especially since the traditional spring rolls really go with everything. Tong recommends the pulled pork version to start. But just to be sure, you might as well try the chicken, shrimp, and veggie versions too.

Do you have a hankering for delicious dumplings or rockin’ rolls? Check out Dump N Roll’s full catering menu or place an order.