Le Boulanger Answers the Call (for Breakfast and Lunch)

Its California roots dating back to the 1920s, Le Boulanger catering and its senior director of sales and operations, Jerome Dees, know a thing or two about making and selling bread in the San Francisco Bay Area. From one shop in Weed (north of Redding), the original bakery eventually moved south to the Bay Area before expanding, selling, and reorganizing into its current iteration. Today’s Le Boulanger started with a single cafe in Los Altos, a few miles south of Palo Alto, where Le Boulanger developed a reputation for outstanding sourdough, one of the Bay Area’s premier breads, and expanded to included 12 storefronts stretching from San Mateo to San Jose.

Organized as three businesses—retail, wholesale, and catering—Le Boulanger’s catering is overseen by Jerome Dees, who came to the business in 2014. “We have five locations that handle the majority of our catering,” said Jerome Dees. Dees noted that the operating model for the Le Boulanger brand is a hybrid, of sorts. Each store does participate in Le Boulanger catering, and Dees has Le Boulanger catering vans and drivers designated for each store to manage workflow. Many products are baked at the bakery’s commissary in Sunnyvale and then distributed to stores, offering a hub for production and simplifying cooking and prep at the retail locations. “We might start the baking process at the commissary and then finish at an individual store,” said Dees. Food takes the same route with many items premade or pre-prepped at the commissary and finished at the store. 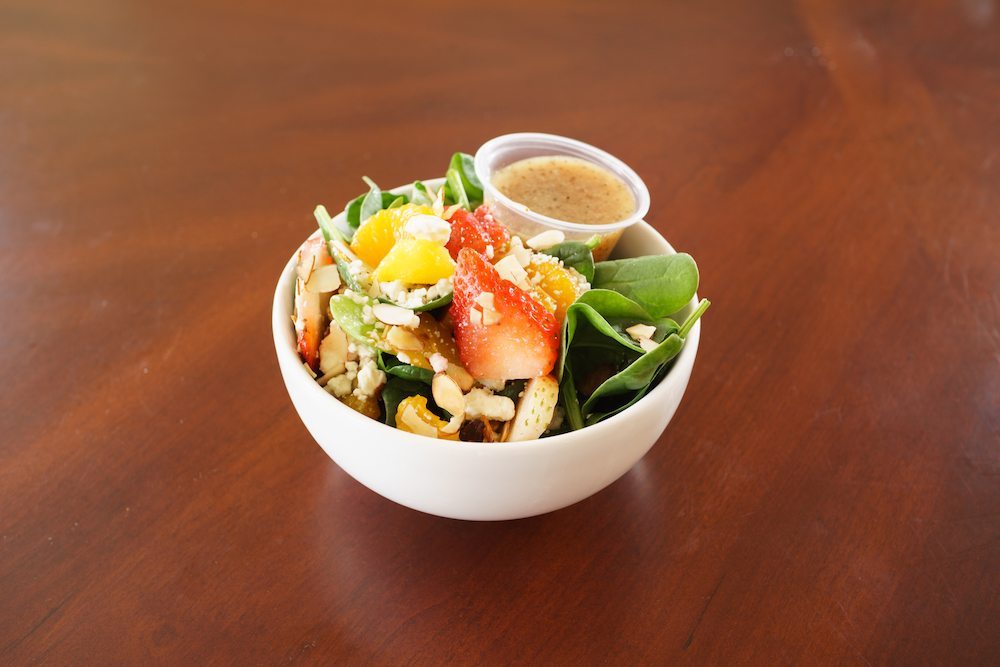 San Franciscans are accustomed to great bread. The area’s famous sourdough is a product of the region’s unique wild yeasts and bacteria, which spend time together to alchemize into a uniquely flavorful starter that defines the bread’s character. Jerome Dees confirms the importance of this bread to their bakery. “The biggest thing is the sourdough bread. That’s our core. A lot of the sandwiches are served on it and it is [served] on the side of our salads,” he said. But sourdough does not reign as the only monarch atop the San Francisco bread world. Dutch crunch (it’s a NorCal thing), soft white bread with a crackly top, is also important here. But Dees notes that on the Le Boulanger catering menu, bagels and pastries, all of which are also made in house, are big sellers. 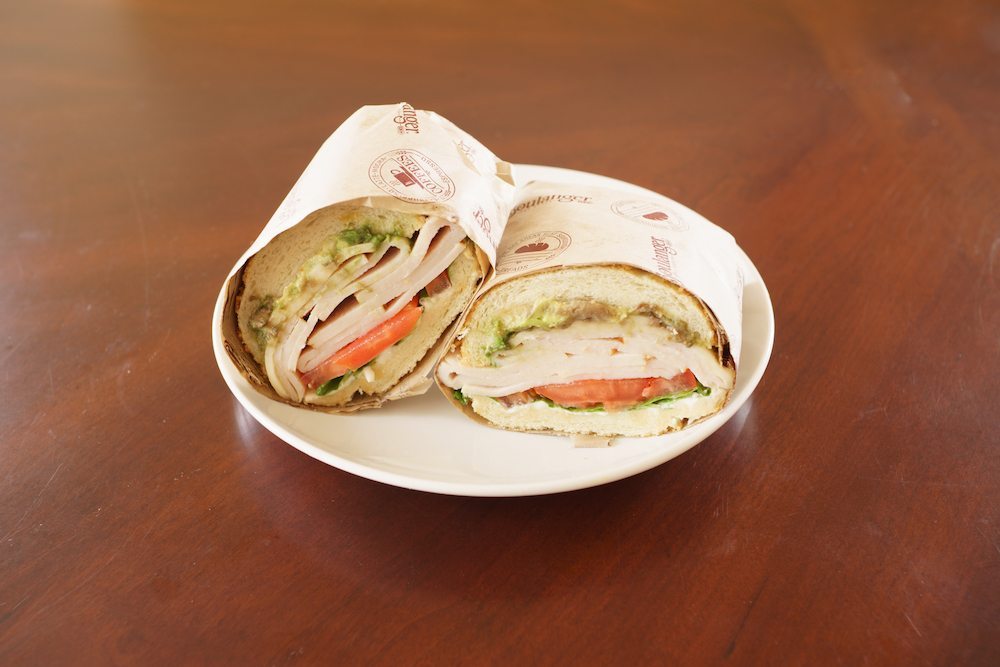 Realizing that customers were requesting more vegetarian and vegan options, Le Boulanger catering overhauled its menu a few years ago to meet this demand for meat-free options. At lunch, “we added a vegan portobello melt and a miso kale salad (to which chicken can be added) to serve the customer base,” Dees said. “It’s a must-have now.” So much so that Dees is looking at more vegan and gluten-sensitive items to add to the menu.

What to Order from Le Boulanger Catering

As elsewhere around the world, many in the Bay Area start their morning with some form of bread. Bagels, croissants, and sourdough are equally important on this menu, serving as the base for popular breakfast dishes like the spinach, portobello, and Swiss on a croissant or the vegetable-medley omelette sandwich on sourdough. “Meat lovers love it for the immense amount of vegetables,” said Dees. Coffee cake, available in apple nut or blueberry, is cut to order, Dees said. Fresh pastries come in an assortment of catering sizes, such as the pastry assortment which includes a variety of petite pastries and muffins. “Blueberry and banana nut muffins are most popular,” said Dees, who noted that raspberry danish outsells all other flavors. At lunch, the California Fresh sandwich is Le Boulanger’s claim to fame. Layers of sliced turkey, Jack cheese, tomato, onion, and Dijon-mayo are fitted between a sliced Dutch crunch roll. It is the ultimate Bay Area sandwich and it has become Le Boulanger’s signature sandwich over the years. Barbecue chicken with cheddar on a ciabatta roll, Cobb salad, or the day’s soup served with a sourdough roll are also popular lunch options. 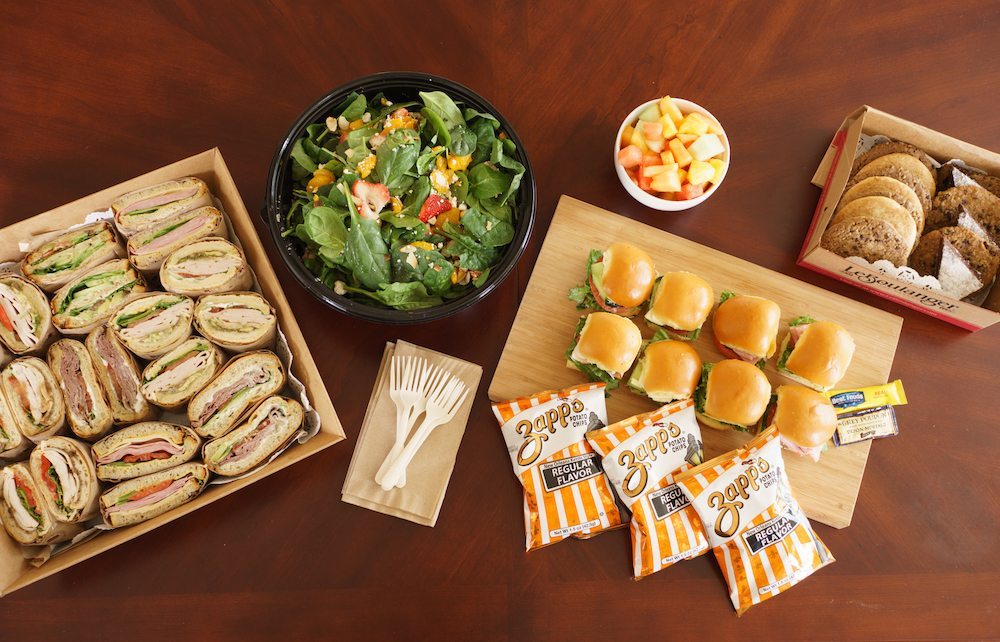 Call In Your Order—Real People Answer the Phone

Dees and his team take great pride in the freshness and quality of the food they serve at their stores. Equally important to the success of Le Boulanger catering, however, may be their commitment to the customer on the phone. Le Boulanger catering does not have a traditional call center. What it does have is Dees and “a handful of talented people” who answer the phone. In real time. No phone tree. “A human answers after the phone rings,” said Dees. (And they will know what the soup of the day is.) This personal touch enables Dees to ensure the order is not only placed correctly but is sent to the best store to handle the order. “It’s one of our biggest advantages,” he said. “It is important for me to know that when someone calls, they are taken care of.” Answering the phone remains an important step in Le Boulanger catering’s customer service. Perhaps this attention to humans helps explain why Le Boulanger’s catering sales have expanded by double digits in recent years.

For more on what’s driving the trends in Bay Area catering, take a look at our take on what’s hot in San Jose catering. Craving California’s best sandwich? Take a look at Le Boulanger’s catering menu or type in “sourdough” on the search page of your hometown. Hungry?