Some say Atlanta’s food scene shines a light on the new and ambitious. Such as the meals served at all eight Atlanta, Georgia, restaurants opened by Ford Fry, whose trendy updates of saucy cheeseburgers and freshly shucked oysters lure diners to the city’s perimeters. So does the food of award-winning cookbook author and Top Chef judge Hugh Acheson, who dishes up Southern cuisine at Empire State South. Of course, these restaurants only strengthen other food and drink options in Atlanta (Achie’s, Spiller Park, Restaurant Eugene, and the farm-forward cuisine of chef Anne Quatrano‘s restaurants come to mind).

Of course, there are others who believe that Atlanta’s food scene is not about the new but about tradition. It’s true that Atlanta is dotted with decades-old restaurants that show no signs of slowing, such as Manuel’s Tavern, Busy Bee, Paschal’s, and Mary Mac’s Tea Room, where you almost can’t order wrong.

Now that Atlanta has proven to be so culinary rich, CNN Travel recently posed the question, “Is Atlanta the American South’s new foodie capital?” Eat your way through the Atlanta food scene with our go-to guide, and judge for yourself.

Where to dine in Atlanta

What are you doing for dinner?

The city of Atlanta recognizes 242 neighborhoods—a sprawl of space for forward-thinking culinary visionaries to play in, like Parnass Savang (Talat Market) and Atsushi Hayakawa (Sushi Hayakawa). Yes, Atlanta is a big city, open for exploring. Here are some destinations in Atlanta’s food scene that are not to be missed. Let’s start from Midtown and work our way out, shall we?

Jump backward in time and head to some of the most beloved historical establishments in the Atlanta food scene. Mary Mac’s Tea Room—aka, “Atlanta’s dining room”— has been serving the classic “meat-and-three” format since 1945. The world’s largest drive-in restaurant, The Varsity, has been bringing chili dogs and colas to customers since 1928. There’s also chef Kingsley John’s restaurant Negril Village, which serves spicy Caribbean in a refurbished 1907 firehouse. If you’re looking for eats a bit more modern, try Marlow’s Tavern for stiff drinks and American pub grub. Nan Thai Fine Dining dishes up some of the city’s most beloved modern Thai fare.

Not to be confused with West View or West End, Westside offers chefs huge restaurant spaces at comparatively low rents—which means that chefs can take those savings and experiment with riskier cuisines. This is perhaps why the area is so ripe with amazing eats and award winners.

Ford Fry’s Marcel, Jct. Kitchen, and The Optimist stand within blocks of each other. Their menus vary, from steakhouse to fresh seafood fare. Also go to restaurateur Steve Palmer’s O-Ku for sushi and Donetto for Italian. For tacos, local chain Taqueria del Sol offers a full-flavored counter-service menu, and Bartaco (also in Inman Park and Chastain Park) combines a beachside vibe with upscale street food. Nearby, is Miller Union, headed by chef Steven Satterfield, whose restaurant and wine program received top awards from the James Beard Foundation. At Twisted Soul Cookhouse & Pours, soul food comes with a globe-trotting twist from chef Deborah VanTrece, who was named by Zagat as one of fifteen “Badass Female Chefs and Restaurateurs You Need to Know Around the U.S.”

The Atlanta food scene can go kimchi-for-kimchi against New York City’s Koreatown eats. You may have to fight traffic as you go up I-85 to get to Duluth, but it’s worth the trouble for Shelly Lee’s bento boxes and bone broth at JS Kitchen. Also worth a trip: spicy street food at Dan Moo Ji; and bowls, barbecue, and noodles from Chung Dam and Jang Su Jang.

Old Fourth Ward is a destination area for food, music, and amazing eats. If you only come for Ponce City Market, you’ll be full and forgiven—where else can you get H&F Burger, Hop’s Chicken‘s beloved buttery chicken biscuits, Honeysuckle Gelato, and 18.21 Bitters all under one roof? Outside of the market, Bantam Pub has a dog-friendly patio and an intimate pub atmosphere. The Mercury brings midcentury cool to American fare. For food + music, Venkman’s combines comfort food, craft cocktails, and eclectic tunes. Two Urban Licks pairs wood-roasted meals with the blues.

Once an area for artists and people seeking hard-drinking late nights, north Atlanta’s Buckhead has morphed into a neighborhood of high rents, highbrow shops, and high culinary bars for restaurant newbies of the Atlanta food scene. Ford Fry’s altar to wood-grilled meats, King + Duke, boasts of an open hearth and a 2014 Best Restaurant of the Year award from GQ. Justin Anthony’s Yebo Beach Haus offers an equally thrilling menu that is South African-slash-American.

In a hurry, Buckhead? Fresh-made garlic knots and hand-tossed pies from Buckhead Pizza Co. and healthy grain bowls from Wildleaf stand up to celebrity-chef fare, fast. And the two-sisters team at CEG Bakery satisfies the sweet tooth of locals, with their Southern-French menu of baked treats so drool worthy you’ll never want to leave the bakery.

When in Atlanta, Eat This! 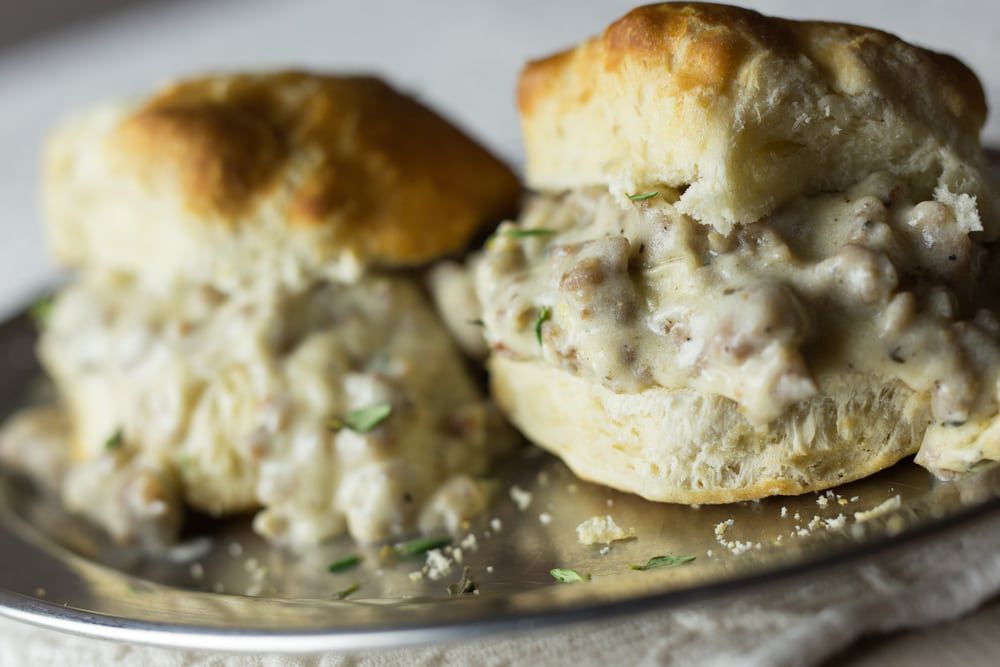 Wherever you land in Atlanta, these eight dishes are not to be missed.

A biscuit should be buttery, fluffy, and full of flaky layers ready to sop up sweet jam or savory gravy. Go to Buttermilk Kitchen’s, Flying Biscuit Café, or Silver Skillet.

Whether it’s made with milk or water, or eaten for breakfast or dinner, grits is a quintessential dish of the Atlanta food scene. Award-winning shrimp and grits is delivered citywide by Flying Biscuit Café. Also check out chef Andrew Smith’s sleek West Egg Cafe, as well as Gato and Home Grown.

Okra grows in excess in Georgia, and it doesn’t get tastier than when battered and fried. Gus’s World Famous Fried Chicken, Pop’s Soulfood Kitchen, and The Colonnade all serve it crispy and hot. The Earl and Venkman’s toss excellent live music into the spice blend, too. 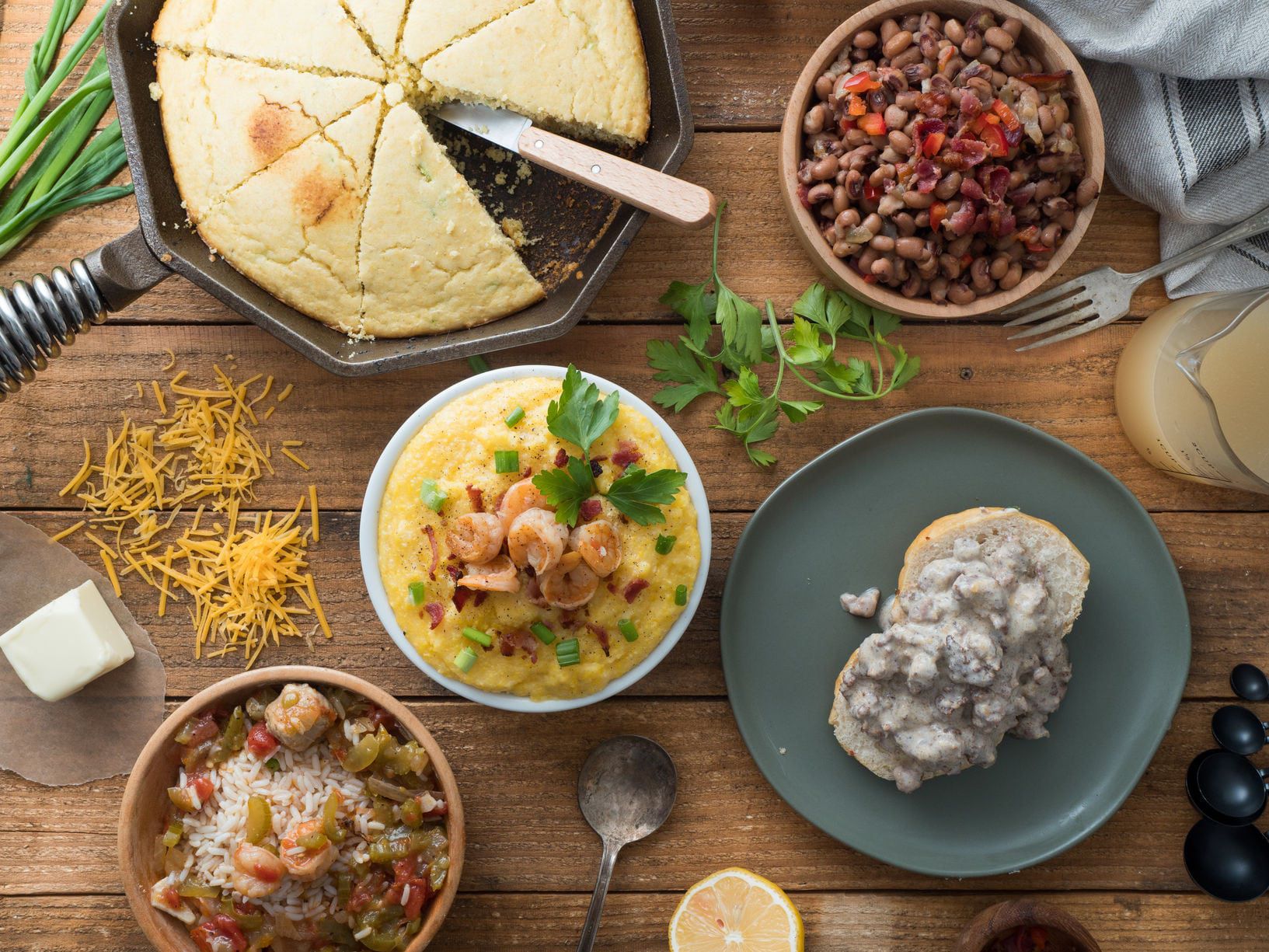 Historically, Brunswick stew—a hearty combo of tomato, local beans, seasonal vegetables, and meat scraps—made its way down to Georgia from the Virginian settlers. But the Atlanta food scene of today has the dish mastered. Make sure to order a bowl at pretty much every barbecue place you stop in at—Lovies, Anna’s, and Sweet Auburn are standouts.

Georgia may not have a designated barbecue style like its neighbors to the north, but pitmasters here know their smoke. Try to conquer the massive Texas-style ribs at Fox Bros. Bar-B-Q, pulled pork and chicken from Shane’s Rib Shack, and the brisket and sausage from Grand Champion BBQ. While there, make sure to order the side of “redneck lasagna” that Table & Main executive chef tells Eater is “comfort food to the max.”

These Southern specialties never dare to be flavorless or mealy. At Paschal’s, Home Grown, Sisters of the New South, and Daddy D’z BBQ Joynt, fried green tomatoes are must-orders.

Cornbread comes sweet or savory. Sometimes it’s studded with fresh corn or baked for a silky-smooth texture. Personal preference plays a role in where you’ll choose to get your fix of this Southern favorite. Fortunately, the Atlanta food scene has plates and plates at the ready. Try Southern Kickin, Creole Foods Company, or, for something different, try chef Kevin Gillespie’s triangles at Revival, which made the folks at Atlanta magazine swoon: “spoonbread-creamy on the inside and fiercely crisped in pork fat on the outside.”

Atlantans take their sweet, buttery cobblers seriously, this being the Peach State and all. Over-order those cobblers at Busy Bee, Mary Mac’s Tea Room, Sisters of the New South, and Big Daddy’s.