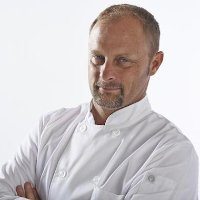 On the surface, a catering order may look like a large a la carte restaurant order. But when you are delivering more than one catering order at the same time, you find out quickly that your catering operations need to be more efficient. “By and large you’ve got one service period if you will, and more or less, all the food has to leave at the same time, because everyone wants their lunch around noon. It’s not like an a la carte restaurant where people are coming in between 11:30 and two o’clock and you need to be able to fulfill that kind of traffic flow. In catering world, more or less Elvis has to leave the building at 11 o’clock,” advises Peter Minich.

Peter Minich, the owner of Fresh City, has been in the restaurant business since he was a teenager. He stumbled into the business after he found that lifeguarding wasn’t for him and a friend opened a restaurant. After culinary school, where Minich met his wife, he worked in restaurants in the Boston-area like Vinny Testa’s and John Harvard’s Brew House, where he expanded teams and streamlined operations.

After earning his chef stripes, Minich moved to the corporate side, running a catering marketplace, where he learned how catering acts as a driver of incremental sales. From there, he earned his management and computer science degree and opened a consulting company. As a consultant, Minich managed restaurants’ contracts and negotiations with vendors and distributors. It was then that he initially worked with former investors in Fresh City. Not long after, they “asked if I wanted to get back involved with operations, so I came in there as the VP of Operations.” A few years later, Minich bought the company.

Obsessed with analyzing Fresh City’s data, Minich has nearly doubled his catering revenue. So we sat down to talk about how running a catering business is different than running an a la carte restaurant and how he streamlined Fresh City’s catering operations.

How is filling catering orders different than filling a la carte restaurant orders?

So, how were you able to streamline your catering operations?

PM: We developed our own internal systems to make it easy. And this goes back 4 years ago to when we had quadruplicate forms and it was all handwritten. They were made so we could take an order on our form, and one went to the hot foods side, one went to the cold side, one went to the bag room, and one went to assembly. You would check off what kind of sandwiches you need, what kind of wraps you need, what kind of salads you need, so everyone has visibility into the entire order, but it’s very segmented in terms of what they’re responsible for, very clear. You have hot food being produced, cold food being produced, and it’s all coming together at the pack table. Then the pack guy sees everything and it goes. So he’s checking everything is there, then the driver double checks everything is there as it goes to the truck.

We’re big on checks and balances whenever and all possible because people make mistakes. The chances of two people making a mistake, it’s a lot less than one person making a mistake. So that was how we made our operations more efficient and better.

Compared to the a la carte restaurant business, how is purchasing different?

PM: From a production and purchasing standpoint, one of the beautiful things about the catering business is that we know what 80% of our business is ahead, so we can have it on hand. And I’m not saying we always have it on hand, we have the occasional running out or doing the occasional quick order, but it’s not like the a la carte restaurant business where you’re prepping up based on orders you think are coming and you’re purchasing based on the business that you think is coming. With good data, good POS systems, people do a good job of forecasting that out, but it’s never really as good as knowing.

Do staffing and labor change when you streamline catering operations? Does it differ from a la carte?

PM: Not so much our production staff. I think that from a 25 or 50,000-foot view, our hiring of management has changed. We definitely look for people who embrace the catering aspect of the business.

From a division of labor, we have our prep and production people. When prep’s all done and the deliveries start leaving, some of the prep people will go on delivery – whether they’re drivers or a second. We have some number of dedicated drivers and that’s what their primary function is.

Then when the deliveries leave, the production people that are left prep for later in the day or get ready for tomorrow. When the drivers come back they help with a lot of the bag stuff, getting the bags ready for the next day.

Like I said, the nice thing about this business is that you know 80% of your orders the day ahead. So things don’t need to be made the same day. Fruit platters can be made for the next morning, cookie/brownie platters that afternoon for the next lunch. So as people come back, some people do that, some people clean out the vans, that kind of thing.

Did you adapt your kitchen for catering operations? Or is it a similar setup to a restaurant kitchen?

PM:  Our catering kitchen is significantly different than our retail kitchen. And to get the catering produced, it’s definitely much more efficient. It’s more of a linear flow from production to packing, and then into the cooler or warming boxes if it needs it, and then out the door.

The restaurant operation, you have to work with the line you’ve got. Which is built to serve the restaurant. If you have the opportunity, if you want to be in the business, you should think about flow of product from the back door to the delivery door and how you make that as efficient as possible.

Once you have a client, how is customer service different from a la carte?

PM: Everybody has to have their needs met. That’s customer service 101. In the catering world though, it’s done remotely. You’re not face-to-face. You’re communicating over the phone, by email, by text. For that reason, you have to have people that can communicate effectively that way and can read between the lines sometimes.

We try not to make mistakes, but they happen. And if you get an email or phone call and the person says it’s ‘no big deal,’’ you know sometimes ‘no big deal’ is a big deal. On that front, discretion is the better part of valor. If you think something may be wrong, treat it like it may be wrong. Nobody’s ever complained about being treated too well.

Hungry? Create your free ezCater account to place an order.