Where the Wok Rules the Kitchen: P.F. Chang’s Catering

Next to the H&M, a gigantic stone horse guards a Chinese restaurant at a mall in Southern California. The horse stands nonstop in Santa Monica, and watches over Hawaii, too, and well over two hundred locations. Undoubtedly you know that the mascot belongs to P.F. Chang’s. Maybe what you don’t is that the billion-dollar brand has won a foothold on Asian-American cuisine.

There are some restaurants whose influence on the course of culture is so diffuse as to become unremarkable. P.F. Chang’s is one of them. Known for upscale Asian food, P.F. Chang’s is so ubiquitous that it’s easy to forget that Chinese food was once little known in America outside of immigrant enclaves. In the 1850s an influx of Chinese immigrants rushed to California, baited by tall tells of gold mountains. For many of them, the dream of wealth fizzled, but from that moment on Chinese restaurants began dotting the American landscape.

Even though the number of Chinese restaurants in America snowballed in the 1980s, quickened by a rapidly growing Chinese immigrant population, a majority of the tearooms and food stalls congregated in the Chinatowns of big cities. Ninety percent of the customers were Chinese, says Haiming Liu, professor of Asian and Asian-American studies at California State University in Pomona. Then P.F. Chang’s came along and created a niche for a much larger crowd. 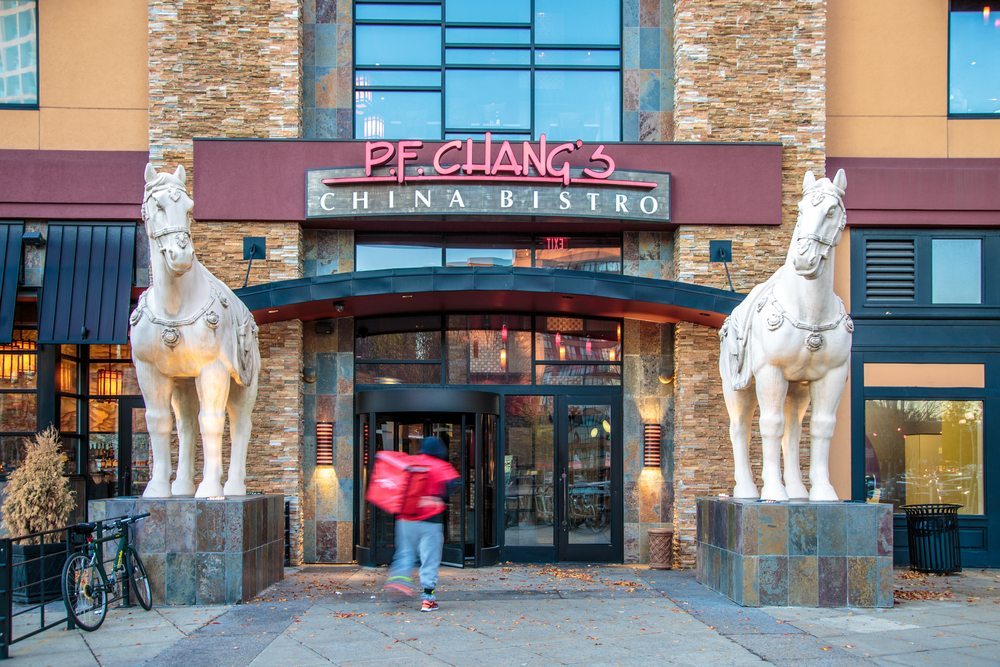 Philip Chiang, whom P.F. Chang’s is named after, bended the concept of upscale Chinese wok cooking because, like all good people, he’s an heir to his mother’s cooking and wanted to make it his own. (Fun fact: his mother Cecelia Chiang founded the famous Mandarin Restaurant and is known as the Julia Child of Chinese cooking.) Tapping into the farm-to-table movement, his restaurant introduced a philosophy called “Farm to Wok.” This means that P.F. Chang’s (and P.F. Chang’s catering operations) culls clean ingredients from farms and calls for its cooks to pleat dim sum and hand cut slices of meat every day from scratch. Their philosophy also entails conquering a 700-degree flame, true to the 2,000-year-old tradition of wok cooking. While wok cooking isn’t new, it’s a technical feat that’s underrated. Done right, cooking on a smoke-hot wok helps food to develop a “complex smoky, singed flavor known as wok hei—the breath of the wok,” say those whizzes at Serious Eats. Julia Moskin, dining reporter of the New York Times, echoes this sentiment: food infused with wok hay “tastes intensely of itself.” 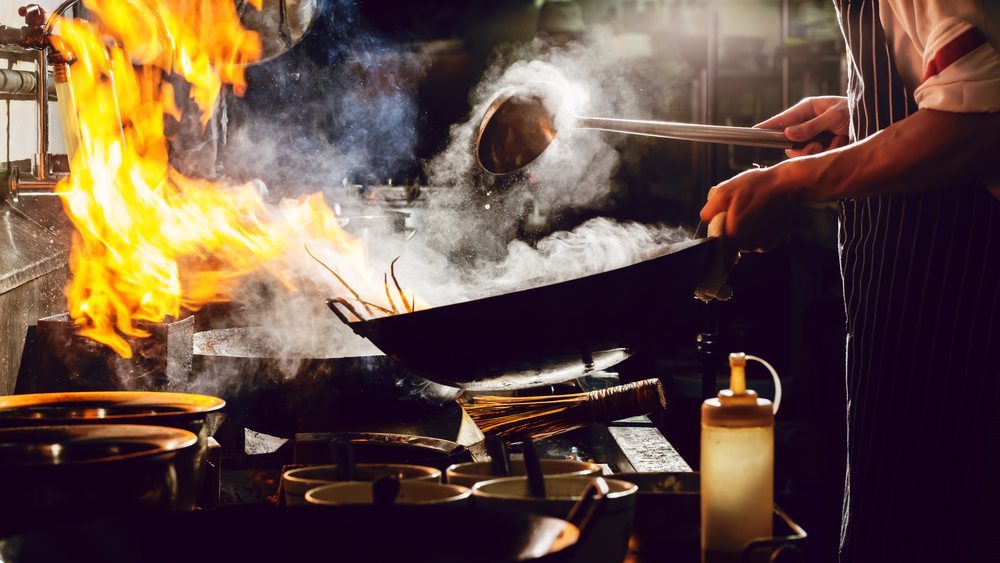 P.F. Chang’s catering offers old concepts and new concepts. The menu gamely tackles Chinese-American classics and other Asian-American incarnations. If you want a taste of old food, try Chang’s Lettuce Wraps, juicy lettuce teacups filled with chicken, and Beef with Broccoli, seared marinated beef in a thickish sauce. In lieu of Chinese, you can order freshly prepared sushi like the Spicy Tuna Rolls or attention-seeking Lobster Avocado Rolls with wild-caught lobster and cool avocado to balance the warmth of curry aioli. Fragrant Hokkien Street Noodles and Pad Thai, with a tamarind undernote, comfort those troubled by terrible Mondays. Both noodle dishes come with your choice of protein, sure to be an instant hit with eaters.

Vegetarians and the gluten intolerant know that a cold, dressed salad is the wrong kind of bargaining chip, but not all restaurants do. Oftentimes vegetarian and gluten-free options feel punishing, but P.F. Chang’s catering does it right. They have an elaborate gluten-free menu prepared with wheat-free soy sauce. The GF Chang’s Spicy Chicken is tossed with spicy sweet chili sauce and tender green onions. The spicy GF Singapore Black Pepper Chicken is built from black-pepper garlic sauce, green bell peppers, and fresno peppers. Vegetarians will enjoy the Coconut Curry Vegetables and savory Buddha’s Feast, with five-spice tofu and crisp, fresh vegetables cooked fast on the wok. 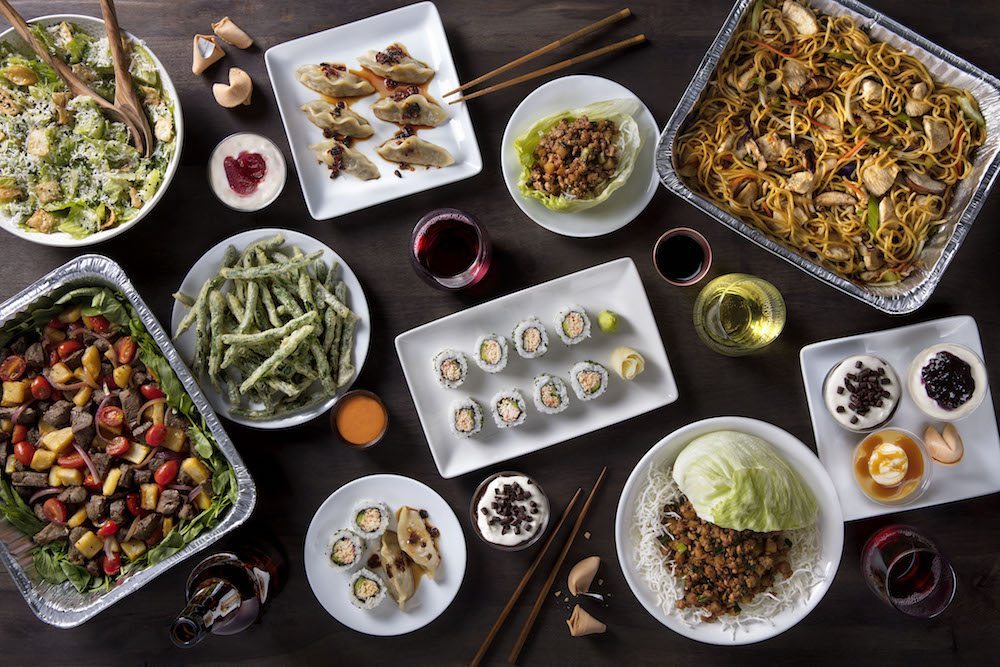 With P.F. Chang’s catering, no one hogs a dish because meals are shared family style, perfect for small and large meetings and company buffets. All P.F. Chang’s catering appetizers, entrees, and noodle dishes serve eight, making it easy to plan catering for groups. The convenient P.F. Chang’s catering packages, like the Farm to Wok Package and Wok-Fried Feast Package, each serves ten and includes your choices of appetizer, entrée(s), rice, salad, and drink.

What Sweets Lie Beyond the Sweets?

If memories of orange slices and enigmatic fortunes makes you think there’s not much need for dessert, think again. P.F. Chang’s catering will overwhelm you with the bellyful of colors and textures on their dessert menu. Try the Great Wall of Chocolate, with six moist layers of cake, or choose from their assortment of Mini Desserts: Triple Chocolate Happiness, Good Fortune Cheesecake, Miso Butterscotch Pudding, and Strawberry & Coconut Cream Cake. Better yet, choose all of them. Metaphor or not, our dessert plates are never refilled as often as we would like.

Looking for P.F. Chang’s catering in your area?