As Cronut-mania waned, Eater’s executive editor Helen Rosner begged everyone to stop trying to manufacture the next big breakfast trend from pastry mash-ups.

Maybe identifying the next big trend—what everyone wants to eat for breakfast in 2018—is downright impossible, especially in a year as unpredictable as this one. Nevertheless, ezCater is tasked with trying to point you in the right direction—so point we shall.

How to Determine a Breakfast Trend

If we use Rosner’s criteria about national mood as a starting point, Americans are likely burned out on news, looking for a breakfast food to ground them—if not in the present moment, then in a better one. A moment with the feeling of expansive time, the better to appreciate more intense flavors that won’t make you feel overburdened or weighed-down.

Add to this a smattering of predictive data about what Americans want to eat for breakfast. According to the marketing experts at Whole Foods, consumer preferences and product sourcing trends both indicate an uptick in Middle Eastern dishes.

The National Restaurant Association picked up on this influence, too, listing “ethnic-inspired breakfast items” as the No. 4 trend in their report, “What’s Hot Culinary Forecast 2018.”

This all makes a certain kind of sense—Americans are perhaps more aware of, and receptive to, foods from other cultures than they ever have been. And the restaurant industry is slowly diversifying at the top, giving everyone more options—and more representation, too.

The chefs who’ve managed to tap into our collective yearning for culinary adventure, while also embracing the appeal of breakfast as a steadfast comfort food, will probably look like they’ve seen this trend coming. 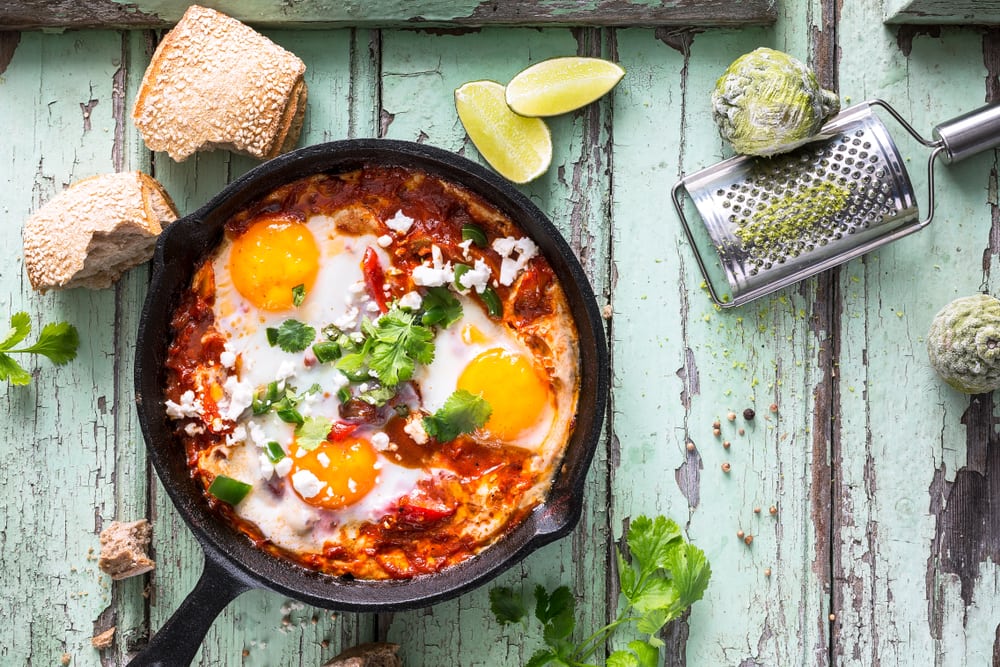 And the Next Big Breakfast Trend Is…

Which brings us to our humble prediction. As Rosner indicated three years ago, it’s unlikely that the combination of “a silly dessert mash-up with a silly name” will ever take off in the same way again.

But there is a dish growing in popularity that evokes the depth of flavor our palates crave and the luxurious feel of a late, lazy breakfast—shakshuka.

A popular breakfast food in Middle Eastern countries like Israel, shakshuka is, at its core, a poached egg dish. But the eggs are cooked directly in thick tomato sauce, brimming with spices like harissa, roasted cumin, and coriander that provide both depth of flavor and a hint of heat. The dish is often served with a dollop of Greek yogurt or crumbled with feta cheese, and warm housemade pita or flatbread is mandatory.

Maybe it’s the near-ubiquity of Yotam Ottolenghi’s cookbook, Plenty, or maybe it’s the rise of the healthy breakfast bowl taking over breakfast and brunch menus across the country. Whatever the factors wind up to be, shakshuka is about to have its moment in sun. Oh, and the five-year Google search trend looks like this: on the up.

Where You Can Find Shakshuka on the Menu

New to shakshuka? Here are five caterers from across the country with the dish on their menu, who each have unique ideas about what to eat for breakfast:

At Asha’s Kitchen, shakshuka is a mainstay on the breakfast catering menu. Not a surprise: in New York City, the dish is sprouting up just about everywhere.

Babycakes Gourmet is well-known to Chicago diners for its gourmet pancakes and avocado toast. But the innovative caterer also serves a shakshuka-inspired pizza. Made with cauliflower crust, the flavorful breakfast pizza is topped with roasted red peppers and a sunny-side-up egg.

Need enough shakshuka to feed a crowd? Mezzeme’s Mediterranean Kitchen in Austin, Texas, is ready to step up to the challenge with its take on this classic dish.

Even in New Orleans, where Creole is king, shakshuka makes an appearance. Try the platter version from Tal’s Hummus, which will provide you with a tasty array of Mediterranean salads, in addition to this breakfast gem.

It’s not Los Angeles catering if there’s not a healthy bowl on the menu, and Palikao is known for their big, bright couscous bowls. Shakshuka comes as a tempting side option.

Wondering what to order for a more flavorful breakfast meeting?

Check out our suggestions