Las Vegas residents know that dining in Sin City isn’t just about buffets anymore. Visitors flock there not only to play casino slots or catch one of the thrilling shows– indulging in the buzzing Las Vegas catering and restaurant scene is also a top priority. World-famous chefs (like Gordon Ramsay, Joel Robuchon, and Giada De Laurentiis, just to name a few) have clamored to open eateries there, according to the LA Times. That means you’ll find almost any kind of food you can think of, both on and off the Strip. Here are the hottest Las Vegas catering trends you should check out right now. 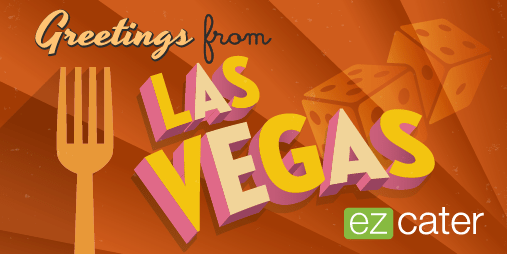 The Best in Barbecue

With those glittering lights and towering hotels, it’s hard to believe that Las Vegas started out as a cowboy city. That’s why barbecue, with its smokey meats served with flavorful, homemade sauces and cozy side dishes, seems so at home on the Las Vegas catering and restaurant scene. Jessie Rae’s BBQ caters some of the best ribs, brisket, chicken, and sausage. “Most of our guests we cater for love the way barbecue stimulates your senses,” owner Mike Ross explains, “the meat is a dark red, it pulls apart, and there’s a red smoke ring. You get so many textures– hard bark, soft meat, sticky sauces.” That includes their award-winning God Sauce. And don’t forget the mashed potatoes, mac & cheese, or corn with smoked butter. 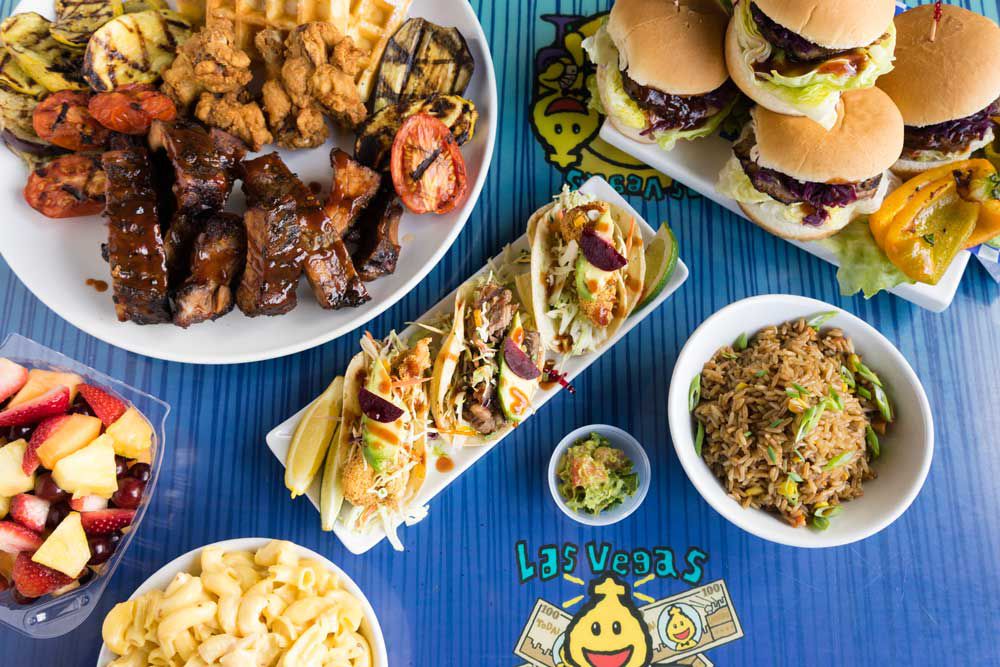 Here’s an alternative for those who need a break from all that meat. With its traditional focus on vegetables, legumes, and olive oil, it’s easy to cater a healthful Mediterranean spread. Plus, it’s usually customizable for those who are gluten-free or vegetarian— maybe that’s why it’s such a trendy part of the Las Vegas catering and restaurant scene right now. It’s not all about Italian fare, though. Chickpeas Mediterranean Cafe specializes in Persian kebabs made with succulent beef tenderloin, tandoori chicken, or grilled vegetables served with fluffy pita. Or fill up on vegetable-forward mezze like cucumber yogurt, eggplant caviar, hummus, and grape leaves before moving onto the tender grilled meats at Las Vegas caterer Shish Kabob House. Maza Mediterranean Grill & Lounge does spit-roasted beef or chicken, as well as a mean Greek Salad packed with cucumbers, red onions, Kalamata olives, and feta. For sandwiches, get your gyro or souvlaki fix at Greek Delights or The Halal Guys.

For something totally different from both barbecue and Mediterranean food, raw fish is also all the rage in Las Vegas catering and restaurant scene – even though it’s in the middle of the desert. And it’s gone way beyond spicy tuna rolls at this point. The trendiest food of the moment is the sushi burrito. “This portable, and often customizable, sushi wrap has inspired a few restaurants to pop up across the Valley,” according to Eater. Jaburritos can be credited with kicking off Sin City’s sushi burrito craze with more than 20 choices. Find outlandish variations bursting with shrimp tempura, surimi crab, romaine lettuce, cucumber, tortilla strips, guacamole, chipotle mayonnaise, and eel sauce, and simpler iterations filled with grilled chicken breast, romaine lettuce, jalapeño, tortilla strips, roasted corn, red onion, and everything in between. The Las Vegas caterer also recently introduced “sushi cupcakes” composed of raw fish and other fillings resting on a bed of rice cradled inside a baked wonton. There’s also an impressive array of sushi bowls, served on your choice of sushi rice, brown rice, or salad.

If it’s traditional Hawaiian poke you’re after, look no further than Bowlology.  Cater sushi-grade ahi tuna, seaweed salad, furikake, and green and yellow onions tossed in a soy-based sauce, sprinkled with sesame seeds and wonton strips, and served over sushi rice, brown rice, cabbage mix, or salad mix. It’s guaranteed to transport you to a tropical paradise, even if you’re in bone-dry Las Vegas.

After all those savory specialties, everyone needs a sweet treat once in a while. Enter doughnuts. It doesn’t matter if you prefer cake or yeast— they’re not just for breakfast anymore. Donut Bar offers traditional flavors like Apple Fritter and Glazed Vanilla Bean. For more surprising flavors, your vegan colleagues can enjoy Creme Brulee or Birthday Cake Oreo with a cake batter glaze and cookie crumbs. Having trouble deciding between cake and doughnuts? Retro Bakery has the solution with Coffee & Donuts Cake (Vanilla cake with donut glaze and coffee buttercream) or Sprinkled Donut Cake (Vanilla cake with fudge topping and sprinkles). It’s the perfect alternative to the usual plate of chocolate chip cookies.

Craving some of these Las Vegas catering trends?