The Los Angeles food scene is eclectic: equal parts Asian soul, California green, and Latin American chutzpah. The “see and be seen” restaurants are still here, like Wolfgang Puck’s Spago, of course. But popping up in every neighborhood is a unique culinary culture that is distinctly L.A. Maybe it started when taco trucks morphed into centers of innovation, dishing out Korean tacos and vegan Southern fare. Or maybe it’s because Los Angeles catering is so often where trends get their start. Whatever the reason, the Los Angeles food scene offers everything from classic SoCal dishes to vegan po’ boys. Here’s where you can find any dish you crave.

The LA Food Scene by Neighborhood

Vegan options abound in these gentrifying neighborhoods. Sqirl may have started the vegan brunch trend in the Los Angeles food scene, but nearby Jewel is the latest haunt for luscious salads and colorful alternative burgers. The Highland Cafe serves up killer breakfast burritos, including vegan versions with jackfruit or soyrizo. Jugos Atzteca has Mexican-style juice on tap. And you must try the pastrami quesadilla from J&S.

Roy Choi got his start here, but this neighborhood—like so many in the Los Angeles food scene—defies easy categorization. One part tiki, one part Southeast Asian, Here’s Looking at You is the ultimate fine dining mashup. Try the octopus hushpuppies with takoyaki sauce for something fun and unusual. Isaan Station serves northern Thai, while Korean barbecue joints, like Genwa and Park’s BBQ, anchor the scene.

Chinatown is just north of downtown, and its Far East Plaza is one of the most interesting food hubs in the city. But there’s some bang-up Asian food in Arcadia, too. The Westfield Santa Anita is an epicenter of the LA food scene and boasts an East Asian food court. The first US location of Din Tai Fung opened here. There’s also hot pot from Hai Di Lao, fresh udon from Tsurumaru Udon Honpo, Korean pastries at Somisomi, and bubble tea from Lollicup.

Though the hamburger’s humble origins are disputed, McDonald’s definitely sold its first burger in San Bernardino. Try a classic single cheeseburger at Everson Royce Bar in DTLA, or a “truffle shuffle” burger at Stout in Hollywood. Glam it up at 25 Degrees at the Roosevelt Hotel in Hollywood, where housemade sauce and craft cheese make this one of the best burgers in the Los Angeles food scene.

Chicken and waffles, an important dish in Los Angeles catering, got its start in Hollywood at Roscoe’s in 1975. Over in Fairfax, Plan Check Kitchen + Bar reinvented the dish with PCH porter waffles and whipped pig candy butter. Wood and Vine offers a rosemary-infused take that you just can’t miss.

The Los Angeles food scene has its share of great salad places, including Sqirl, which still serves the vegan, gluten-free “kabbouleh” salad that put them on the map. And then there’s the organic vegan restaurant Flore, which dishes up “The Salad” to raves. Both are located in Silver Lake.

Cult Food: The Art of Eating Vegan in LA

Los Angeles catering knows its way around a grain bowl. “When I started in restaurants a long time ago,” Ron Russell, chef and co-owner of Suncafe explained, “there were only five vegan restaurants in all of Los Angeles. Now there are more than 300.” Shawna Kenney, a journalist who covers the vegan scene for the Los Angeles Tourism and Convention Board, says that nowhere else in the world will cater to you as well as in the Los Angeles food scene. “There’s something for everyone here—whole foods, plant-based, oil-free, celiac, vegan. [It’s] all here,” Kenney told ezCater.

Los Angeles restaurants and catering businesses are also well respected for international cuisine, which means there’s a vegan variation of just about any food you crave. Vegan ramen is the name of the game at Ramen Hood. There’s vegan sushi at Shojin, and vegan Ethiopian at Rahel. The Plant Food for People food truck even won a taco contest with its vegan, sazón-seasoned jackfruit taco. With locations sprouting up all over town, Veggie Grill makes vegan and vegetarian food even more accessible. Think kung pao tacos with crispy chicken and pickled Fresno chiles.

Doesn’t everything taste better on top of a tortilla? Roy Choi’s Kogi taco, Korean-style barbecued short ribs served on a corn tortilla, was the city’s first Asian-Mexican mashup. Since then, Guerrilla Tacos and countless others have used local ingredients and global flavors to make inspired combos, like a sweet potato taco with almond chili and feta.

Don’t be fooled. Despite its reputation as a city full of health nuts, Los Angeles and its catering joints love dessert as much as anyone. Donut Friend in Highland Park and Donut Farm in Echo Park offer flavorful combinations, and Cocobella Creamery and Mikawaya, home of mochi ice cream, make their very own cold treats.

Deep-fried fish topped with cilantro-flecked cabbage, lime juice, and chiles—all served on a warm flour tortilla—are the hallmarks of this classic Los Angeles catering dish. Tacos Baja offers a traditional version, while both Mexicali Taco and Mohawk Bend have northern Baja-style plates on the menu. 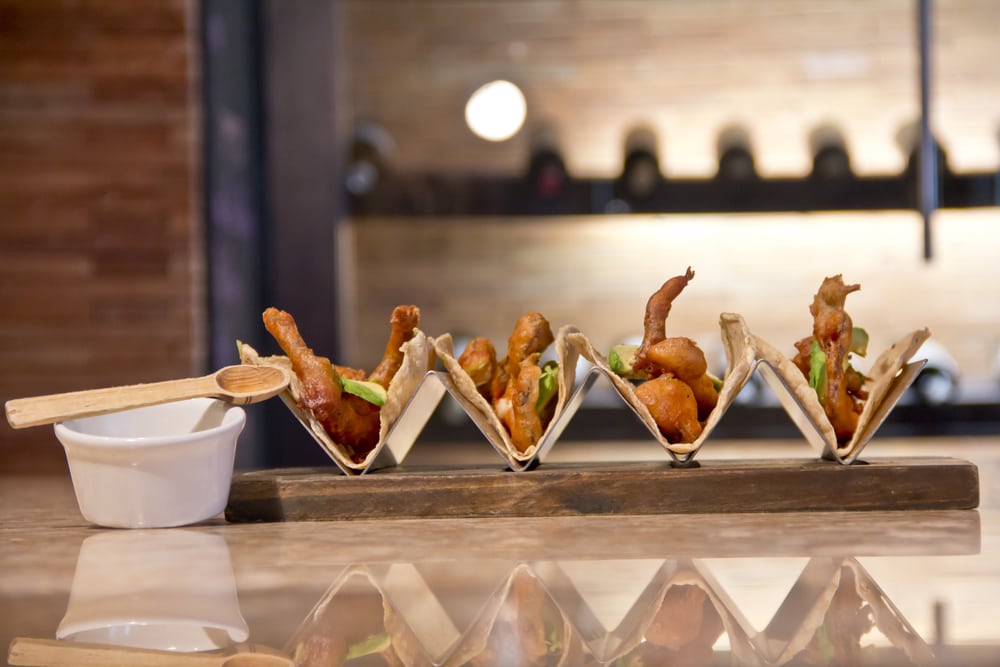 Nancy Silverton opened Osteria Mozza in 2007, and the Italian food scene in Los Angeles exploded not long after. Northern Italian is in at Rossoblu, and both Il Romanista and Triple Beam serve Roman-style pizza. Cosa Buona and Jon and Vinny’s is Italian-American comfort food at its best.

If you haven’t worked through a basket of steamed dumplings, you haven’t truly experienced the Los Angeles food scene. Din Tai Fung and Mama Lu’s each serve soup dumplings in multiple locations throughout the city.

What’s the next step for a city that devoured Korean fried chicken? Nashville’s hot chicken, of course. Try this trendy new dish on the Los Angeles food scene at Howlin’ Ray’s, or the popular Nashville pop-up Hotville Chicken.

The now-famous dish catapulted into the Los Angeles food scene in 2008, thanks to chef Roy Choi and his food truck, Kogi BBQ. It launched the food truck revolution, along with countless imitators. You should try them all.

The potato taco is so LA that versions of this carb-heavy classic are available all over town. Try them at just about any Los Angeles catering outfit that serves Mexican food, but especially My Taco, Suncafe, or Rice Bar. You can go frozen with Hugo’s Tacos sweet potato soft serve, too.

Curious about the best caterers in Los Angeles?