Among the things that Americans are learning to love are “meats” and “milks” made from alternative protein sources like soy and peas. The image of almond milk and plant-based lab burgers has been reworked over the years. So much so that a portion of Americans—roughly one-third of those known as Generation Y or Millennials—are likely to seek out protein alternatives to meat and dairy, using, say, oat milk in coffee or cashew cheese for bread. One report found that almost one-third of Millennials eat at least one protein alternative to meat every day. That’s a lot of not-bacon! Factor in a growth curve as steep as a pointy Swiss mountain and it is easy to understand why so many players are—and so much money is—moving into the business of alternative protein sources.

If you love plant-based “milk,” “meats,” or have a coworker or friend who does, here’s your news briefing on all things almond milk, hippie cheese, and bleeding impossible burgers. It may surprise you that there’s a lot of ballyhoo and controversy surrounding protein alternatives and sources of sanctuary for the dairy-averse.

Is Rice Milk Frankly Not “Milk”?

Surprisingly, there has been a lot of commotion about dairy alternatives masquerading as good ol’ cow’s milk. At the center of the hubbub are dairy replacements—all the alternative dairy-protein sources on your grocery shelves, from almond-milk yogurt to plant-based cheese. When did putting non-dairy “milk” alternatives in coffee get so charged? Senator Tammy Baldwin (D-WI) introduced legislation earlier this year to “combat the unfair practice of mislabeling non-dairy products.” The objection, according to a press release issued by Senator Baldwin’s office, is to the word “milk.” The press release states, “For too long, the FDA has turned a blind eye to the misbranding of imitation dairy products, despite the decades-old federal law that milk comes from animals, not vegetables or nuts.” 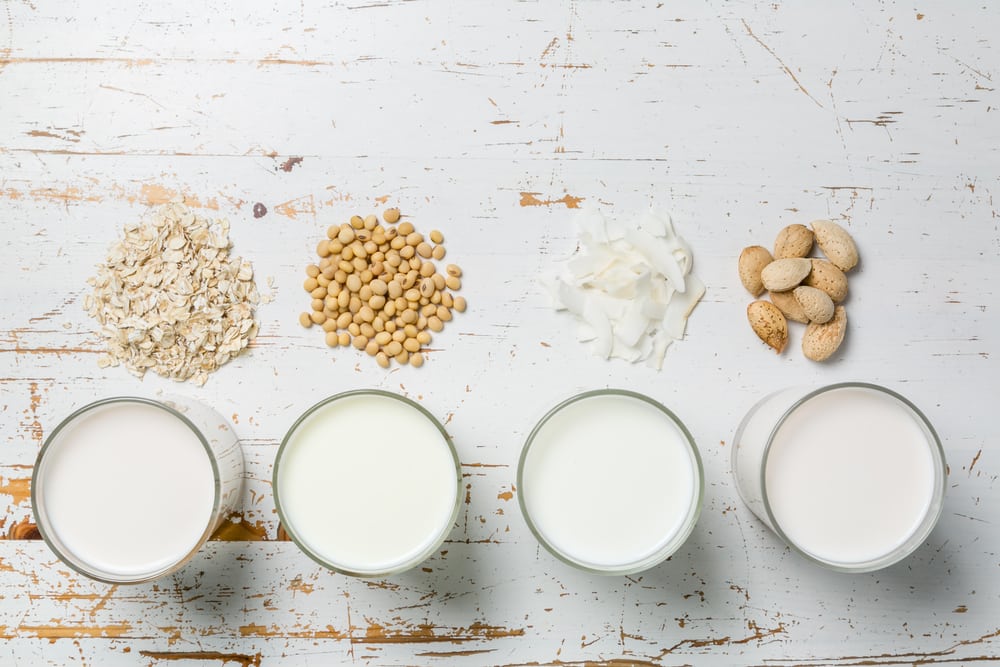 We all know what milk is, but even Merriam-Webster’s dictionary acknowledges its nuances, calling milk the liquid that flows from animals or seeds or fruit. With this definition front of mind, is it reasonable to call a liquid made from squeezed oats or hemp “milk”? While Congress sorts out the labeling of milk, let’s take a quick look at what restaurateurs, caterers, and people who order food for groups need to know about these protein alternatives to dairy.

The Impossible: Protein Alternatives to Meat That Look, Smell, and Taste Like Meat

Much has been written about the “bleeding red” plant-based burger from Silicon Valley-based Impossible Foods. Backed by heavy hitters such as Khosla Ventures, Google Ventures, and Microsoft’s Bill Gates, the company’s 100-percent plant-based Impossible Burger was designed to taste, smell, and cook just as a beef patty would. Made of textured wheat and potato protein, this protein alternative to meat hits all the beefy requirements eaters love without bringing in the cow: the Impossible Burger patty sizzles on a hot grill, sends out a tantalizing aroma while cooking, and oozes red “blood” when you take a bite. All that and 19 grams of protein in an 85-gram burger? That is a protein-packed alternative-protein source if ever there was one. Other players in the field, including Beyond Meat and Field Roast, are developing plant-based protein alternatives to meat. Does it matter that the burger is vegan, too?

Americans still consume a startling number of beef burgers every year (three a week, according to NPR, or 50 billion a year) but if these makers can produce plant-based alternative protein sources that taste as satisfying as a beef burger, the stakes—and the environmental impact of our diet choices—will change. As the Impossible Burger finds its way onto more restaurant menus, it is no wonder that, according to CBS News, the U.S. Cattlemen’s Association has started a throwdown of meat against “meat.”

Read more about the Impossible Burger and how restaurants are adding it to their menu here or learn more about how the burger business is changing.