When the daily grind starts grating on your nerves, a change in activity or scenery is in order. That’s why an offsite staff retreat can be valuable. Offsites are good for our brains, too. According to a Scientific American article:

“Novelty also triggers dopamine […] which not only kicks motivation into high gear, but it stimulates neurogenesis – the creation of new neurons – and prepares your brain for learning. All you need to do is feed the hunger.”

There are a few good reasons to have staff retreats or offsite teambuilding activities. But before you start planning, know your company’s history. Your offsite announcement may get a mixed response, depending on the success of past events. When offsites work, though, they really work. Advocates liken them to basketball team huddles or training camps. They can be vital for team bonding, and can help your team focus on a common goal.

Yet, assuming that a scenery change alone will guarantee an event’s success is shortsighted. Like most things worth pursuing (and spending money on), an offsite teambuilding activity can become an outright disaster without careful planning.

With that in mind, here are seven tips to help you strike a balance between having fun and getting things done. 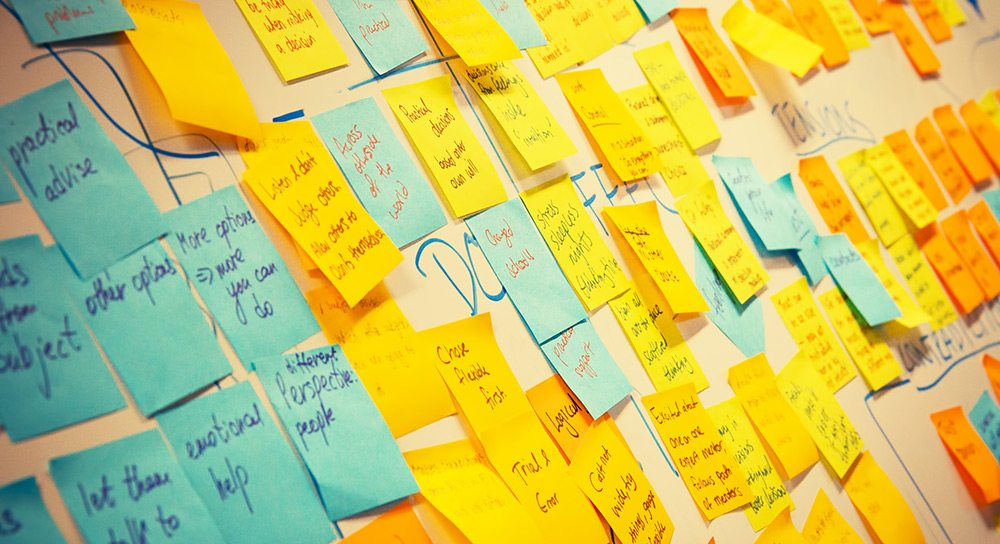 Set your goals for the staff retreat

Gather staff retreat ideas from participants, including the structure and content of the event. More viable ideas mean more choices for the whole team. For more honest input, entertain anonymous suggestions. Then design your retreat agenda based on the team’s feedback.

Plan, brainstorm, and structure the agenda

You likely have budget and schedule restrictions. It’s important to know beforehand how much money is available for the event, and how long the offsite retreat will run. Scouting locations, accommodations, and dining options is easier if you know your resource limitations.

Activity planning isn’t something you hit right the first time. Give yourselves enough wiggle room to solidify the retreat’s objectives. And give yourself time to brainstorm which activities to include in the agenda. The chart from Harvard Business Review below uses a 60-day planning-to-execution timeline. 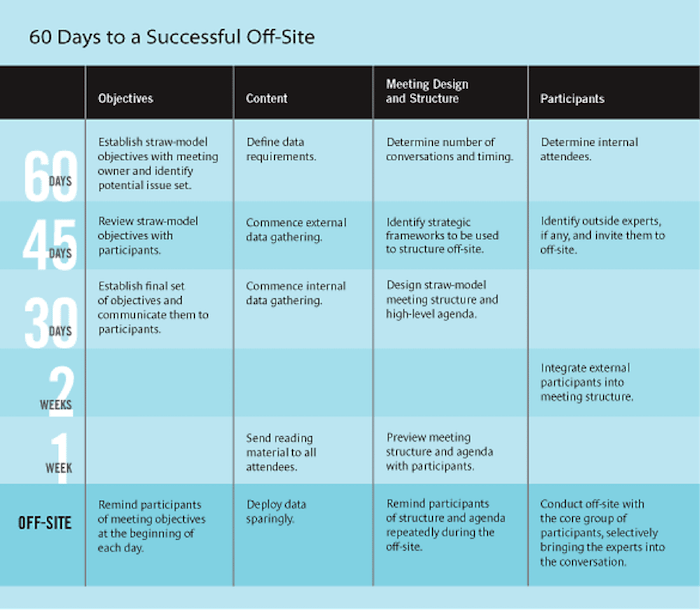 This part of the process is important. After all, the venue is a primary motivation for employees to sign up for offsite meetings. Conference centers and hotels are the most common. Depending on the structure of your offsite event, you might seek more creative options. Creative spaces foster teamwork and cooperation. Locations like sports centers, theme parks, and even event spaces can get people talking.

If your budget allows for it, consider renting a private resort or vacation property. Relaxing by the pool after an activity is one way for participants to decompress and recharge.

Do a site visit first to ensure the facility is well-equipped to host a large number of people. Make sure you check on the number of restrooms and the cleanliness and safety of the area. You also want to pick a venue with storage space for the team’s belongings and ample dining choices. 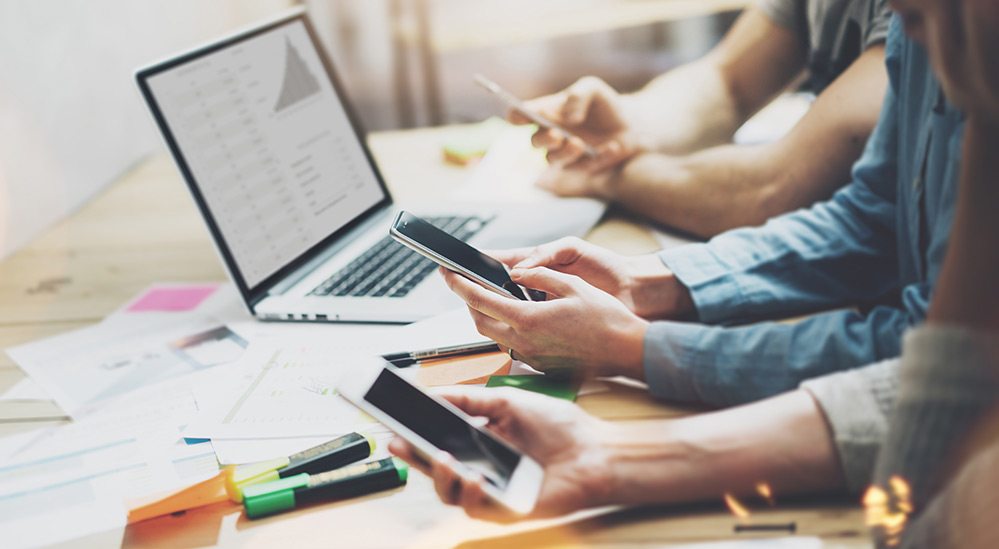 You don’t need to give up your smartphone the entire time – only during scheduled sessions. Some people may find this rule impractical, but too much technology can be distracting. Going without it (at least while sessions are underway) allows participants to focus on face-to-face interactions.

Keep the participants moving, or on their feet at least

According to a study cited in Fast Company, researchers found that “team members who stood [during meetings] were more engaged, less territorial about their ideas, and generated more creative results.”

Some activities you might want to try can include:

Don’t forget – you’re also there to have some fun

A lack of leisure is a breeding ground for resentment, according to Richard Moran, CEO of Accretive Solutions. He tells a story about a financial company in San Francisco that held an offsite retreat at an exclusive ski resort. Unfortunately, they gave people no chance to ski.

The attendees could ski between 7 and 9 in the morning or after 5 in the afternoon. The problem was the ski lifts ran at exactly 9 a.m. and stopped at 5 p.m. This made the company’s employees grouchy and nothing much got done.

Give employees space to recharge and they’ll end up making more progress.

Encourage presenters to think of other ways to present content.

PowerPoint presentations aren’t the only ways to convey a message. Think outside the box and consider this “no PowerPoint deck” principle one company employs. Presenters share their content in more creative ways. In one meeting, the Vice President hand-wrote personal cards to all 39 people on her team. The VP then spent two hours going around the room to celebrate their achievements.

Instead of PowerPoints, consider other media like music, videos, flipcharts, and games. Engage the audience. Instead of boring them with static presentations, get them to take an active role. Provide them with sticky notes, lots of paper, and coloring materials to get creative.

It’s not “just another meeting.” Companies and organizations spend a lot of money on offsite events. That’s because they hope to squeeze real actionable results out of them in the long term. Also keep in mind that planning a successful offsite retreat is one thing. What’s most important is what happens after. Set aside time to reflect and evaluate whether the event’s goals were met. Track the team’s progress through periodical check-in meetings and follow-up conversations with team members. Try it, track it, and make it better.