San Diego Catering: the Next Destination for California Foodies

San Diego is famous for sunny weather, beautiful beaches, and a laid-back vibe. And, thanks to a thriving college population, the beer and nightlife sometimes get more attention than the food. But all that’s changing. Travel and Leisure says “restaurants in San Diego have come a long way in recent years” with more choices than ever, authentic ethnic cuisine, and a couple of restaurants from Top Chef All-Star Richard Blais. Zagat calls it a “booming culinary city” and even pushed the idea that the San Diego restaurant scene is a tough a rival to Los Angeles’. So what will you find when it comes to San Diego catering? 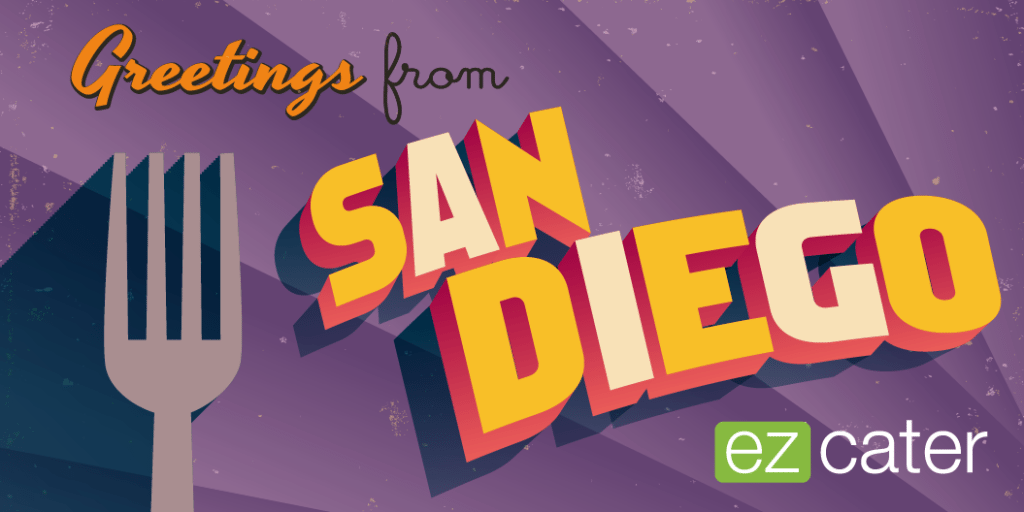 Being so close to the border with Mexico, it’s no wonder that Mexican food is popular and plentiful on the San Diego restaurant scene. While there is a bounty of taco bars, the street food in San Diego catering is an absolute can’t-miss. The hit delicacy at Famoso Mexican Street Food is something they call Street Fries, an irresistible concoction of fried potatoes topped with your choice of meat, shredded cheese, cotija cheese, guacamole, pico de gallo, chipotle, and cilantro sauce. For breakfast, fill up with their out-of-this-world Buenos Dias Burrito which is stuffed with bacon, ham, egg, french fries, cheese and guacamole. At El Comal, try the tortas, a traditional Mexican sandwich, which comes with a choice of fillings like carne asada or ham and cheese with refried beans and fresh guacamole piled right on top. Fresh ingredients are the key to the best authentic Mexican and the Chicharron de Queso (a kind of melty, crunchy cheese) at El Charko, is balanced with a serving of housemade guacamole. Their green and tangy Cactus Salad is the perfect side dish to round out the meal, and don’t forget to finish it all off with their Churros topped with Cajeta, a caramelized goat milk.

Not Your Average Barbeque

Moving away from the Mexican border and heading east toward the Midwest, barbecue is a hot choice on the San Diego restaurant scene. According to JP Canton of BBQ Boss, “The BBQ craze is gaining momentum in part due to the large military community assigned to San Diego, many of whom come from the South and Midwest. Good barbecue establishments have the potential to do really well here.” While top-rated BBQ Boss offers traditional barbecue chicken, brisket and pulled pork, you’ll also find some surprising regional takes on barbecue around town. For sweet Hawaiian classics like huli huli chicken and Kalua pork, check out Chris’ Ono Grinds Island Grill. Or hit a Brazilian beat at Samba Brazilian Cuisine where steak, sausage and chicken are grilled to absolute perfection along with traditional sides such as farofa (toasted cassava flour). Asian barbecue can also be found at places like Tabe BBQ Mobile Asian Fusion, where they serve Korean spicy pulled pork alongside bulgogi beef sandwiches and teriyaki chicken tacos.

If you’re not feeling barbeque but are looking for an old standby, pizza is wildly popular in San Diego. This is, after all, a college town. But we’re not talking about plain old cheese and pepperoni. Urbn Catering bakes a New Haven style pie called the Mashed Potato Pizza which is topped with creamy white sauce, crispy bacon, and salty Parmesan. For more of that New England-style, try Square Pizza Co. who serves North Shore Boston style square pizzas like the Methuen with basil, ricotta, and garlic. For some true inventiveness, check out Stacked, where they delight customers with creative combinations such as the Pastrami Pizza with mozzarella and Swiss cheeses, dill pickles, house-made garlic sauce, and spicy mustard. Cheese-lovers will go crazy for their Mac & Cheese Pizza with mozzarella and blue cheeses, applewood smoked bacon, and Parmesan bread crumbs.

No matter how much they love pizza, Southern Californians will always dig their health food. Good weather means a year round outdoor lifestyle and with that comes a health-conscious attitude towards eating. Healthy San Diego catering options include juice bars, nutrient-dense smoothies, fresh salads, and tangy acai bowls. But all caterers need to be aware of health of dietary restrictions, says David Rogow of Dinners by David, “We have to be prepared for gluten-free, vegan and vegetarians, it’s important to be able to accommodate everyone in the group, even if it’s just a few people.” Rogow thoughtfully includes a vegetarian count for all his catering options and stresses the importance of using high-quality, fresh ingredients. One on trend spot is Grabbagreen who offers breakfast wraps such as the Steak and Egg Collard Wrap stuffed with yams, red pepper, red onion, and harissa (Moroccan chili paste) sauce as well as a variety of “green” and grain bowls. Or try the Happy Vegan Salad at Tender Greens, baby greens topped with farro, quinoa, tabbouleh, green hummus, and lemon vinaigrette.

A Taste of the Middle East

If you’re keeping things healthy while juggling different dietary restrictions in your group, authentic Middle Eastern menus often include a variety that ensures everyone can find something that works for them. San Diego has been a welcoming spot for refugees including a majority from Iraq and is home to a large Arab population. As a result, Middle Eastern food is popular here with just about everyone.

Part of the appeal of Middle Eastern is that it offers plenty of Mediterranean favorites that vegetarians, vegans and gluten-free love like Baba Ghanouj (roasted and mashed eggplant dip), hummus, and falafel at the Lebanese spot La Miche Kabobgee. Keep the gluten-free set stuffed with the tasty shawarma and kebabs at the Afghani Maza Grill Kabob and it’s all kebabs at at Sadaf Persian Cuisine, where four different menu options come with sides of fattoush salad and minty cucumber-yogurt dip. The Kebab Shop is a family owned favorite that has been serving San Diego for over 10 years. The menu is based on the kind of Turkish street food that’s popular in Germany and Holland. Their top order is the Carved Beef & Lamb Döner which spit-roasted lamb and beef, romaine, pickled red onion, tomato, onion, cucumber, mint, cabbage and carrot slaw all wrapped in a fresh piece of flatbread and served with garlic yogurt and spicy cilantro sauces. But the Falafel Döner lunchbox will make the vegans and vegetarians cheer.

Look out California, San Diego restaurant scene is fast becoming the next destination for foodies. With its abundance of sunshine, healthy living and a zest for culinary innovation, the sky is the limit.

Check out the 10 Best Caterers in San Diego  and what’s popular and on trend!

Check out San Diego catering and place your order today.