Restaurant Review: What We Like About Dickey’s Barbecue Pit

If you’re in the market for delicious, slow-smoked meats and traditional sides, all at fantastic prices, look no further than Dickey’s Barbecue Pit. It’s been that way ever since 1941, when Travis Dickey, a World War I veteran, opened the first outpost in Dallas. The family tradition continues today with Roland Dickey, Jr. serving as Chief Executive Officer.

You won’t find any liquid smoke or smoke-flavored rubs here. The barbecue pit remains the center of every location. The meats, which are always hand-selected and antibiotic-free, are still prepared the traditional way— hand rubbed, smoked slow and low over hickory wood, and then served hot. When you bite into the succulent meats that smoky taste is unmistakable. The brisket, in particular, always has a thick bark and dark internal smoke ring—  proof that it has been smoked the traditional way.

Dickey’s Barbecue Pit has now grown to 500 locations in 43 states, but they still personally train the pitmasters of each location to smoke meat just the way their founder did. That’s not typical of big barbecue chains, but Dickey’s is proud to stand out from the competition. In fact, Nation’s Restaurant News recently named it one of their Top 100 Restaurant of 2017. Give Dickey’s a try—it’s sure to become a favorite.

What to Eat at Dickey’s Barbecue Pit

If you’re planning for a generous spread on a budget, the Barbecue Buffet is the perfect choice. Everything you need is included (except drinks and dessert), and the price will be about $10.95 per person. It comes with two slow-smoked meats (Pulled Pork, Beef Brisket, Chicken Breast, Polish Kielbasa Sausage, Jalapeno Cheddar Kielbasa, Turkey, or Pork Ribs). Too hard to pick? Then try pairing one of the poultry items (smoked chicken or turkey) with the pulled pork or brisket. It also comes with three sides, as well as Dickey’s famous buttery rolls, a relish tray with pickles and onions, choice of barbecue sauce, and paperware.

For meals on a tight schedule, consider the box lunches. The Standard Box Lunch comes with your choice of sandwich, chips, and a cookie. All sandwiches come topped with pickles, onions, and barbecue sauce. For just $1 more per person, order the Deluxe Box Lunch which comes with one of Dickey’s famous sides like coleslaw, mac & cheese, barbecue beans, and more. The pies, especially the pecan, are a festive ending to the meal. 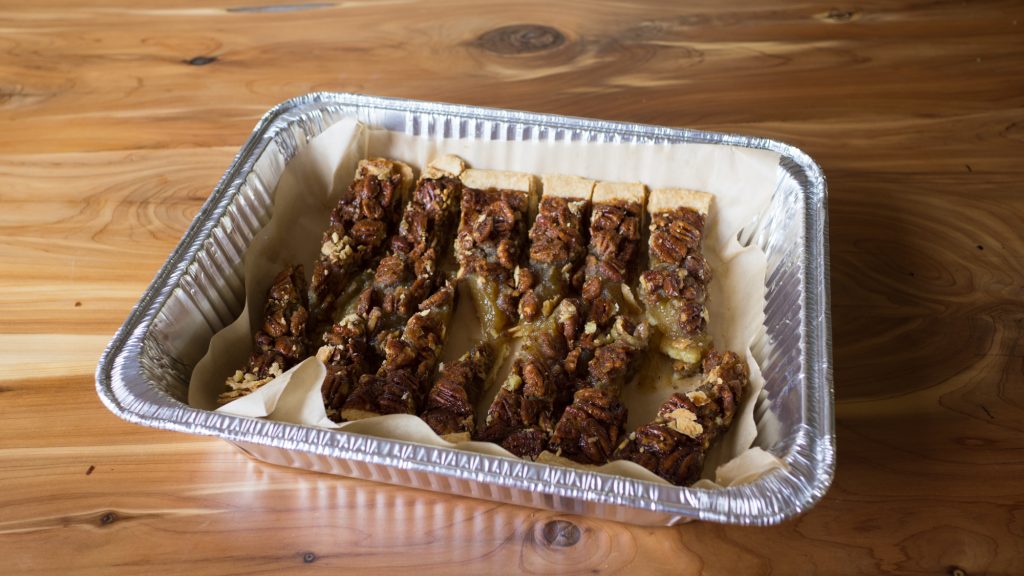 Other Tips for Catering from Dickey’s Barbecue Pit

Dickey’s Barbecue Pit also accommodates special dietary needs. Conveniently, all of their meats are naturally gluten-free, and so are many sides including the Baked Potato Casserole, Green Beans with Bacon, and Cabbage Slaw.

For filling up a large group at a reasonable price, Dickey’s Barbecue Pit is a great choice. Not only do they offer a huge variety of meats and sides for everyone’s tastes, but there are enough different menu items to keep everyone satisfied.