How to Order Paleo Catering that Includes All Eaters

Ordering paleo catering is not as difficult as it might sound. In fact, if you have ever been told to eat your vegetables or to cut back on carbs and sweets, then you already understand the basics. The paleo diet, according to the Mayo Clinic, is an eating plan that is based on foods our human ancestors likely ate- foods that pre-date agriculture and modern farming practices. Following this philosophy means cutting back on farmed foods of all kinds and instead eating foods that were traditionally hunted or foraged. 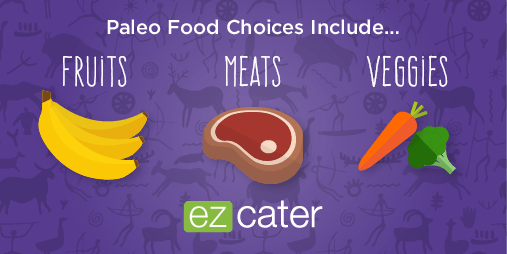 Ordering paleo can be as simple as asking for a protein dish and a vegetable dish, but to help sort through the ins and outs of paleo catering, we have pulled out a list of foods that meet the requirements as well as some tips for recognizing which meals are paleo before ordering for your next event.

Eating paleo includes many foods already familiar to most eaters, including:

Animal-based proteins, such as beef, chicken, pork, and eggs are considered paleo if they are grass-fed, pasture-raised, organic-fed, or- for seafood- if it is wild-caught or sustainably-raised. By choosing wild proteins or proteins raised with minimal impacts from modern agriculture (pesticides, hormones, artificial feed), you are eating as close to nature as possible all while avoiding the kinds of foods that stress the body.  Strict paleo-followers even limit their cooking fats to those that come from animals, such as butter, tallow, and lard.

Nuts and seeds are an unprocessed source of essential fats and nutrients and are a paleo-friendly way to add some crunch to menu items.

When it comes to fruits and vegetables, paleo diners stick to organic and in-season because both signal produce that has been minimally processed. Remember, the name of the game is eating as close to nature as possible.

You a should also know about a few biggies that are not paleo-compliant, including:

Any products made with pasteurized milk are frowned upon, including yogurt, cheese, and kefir.

Even nutrient-dense quinoa and legumes such as beans and lentils are not included in the paleo lifestyle. But for most people, leaving out grains is the biggest jump of all because it means living without toast, breakfast cereal, breading, and crackers, all of which contain processed grains.

Most sweets and sweeteners are not included in the paleo diet, including those added to shakes and smoothies, because most of them have been processed as these have already been processed to make them convenient. Some natural and minimally processed sweeteners have gotten the ok from paleo adherents, including stevia, maple syrup, and honey.

While the rules might sound like a lot to keep straight, the good news is that, with some order adjustments and the right catering requests, almost any array of catering dishes is going to include options for paleo diners. Substantial entrees that involve responsible meats such as free-range roast chicken, wild-caught salmon filets, and even hormone-free pork carnitas fit nicely into the paleo diet. On the other hand, paleo diners know to stay away from the side of mashed potatoes or corn tortillas, which are non-compliant. But it is easy to order paleo catering and make everyone, from vegetarians to gluten-free eaters, happy. How? A small effort at customization will do the trick. On each caterer’s page on the ezCater website, once you click on a menu item, click the blue “plus” sign that says “special instructions.” Here, you can ask for dairy on the side of a salad (satisfying vegans, the dairy intolerant, and paleo diners) or for lettuce wrappers for burgers instead of buns (satisfying gluten-free and paleo diners).

Though pancakes and waffles usually won’t work for paleo diners, most restaurants have paleo breakfast foods that will. Look for straight protein dishes- like eggs, bacon or sausage- that are prepared without bread and maybe even feature vegetables. Babycakes Gourmet in Chicago is known for their French Toast Roll-ups but its the Breakfast Bells, whole Bell peppers stuffed with bacon, ham, sausage and egg or with vegetables is a paleo delight (hold the cheese).  Mr. Omelette Caterers near Washington, D.C. offers a build your own frittata bar. Bulk up the spinach, sausage, and onions so you won’t miss the cheese .

Powering up for Lunch

For paleo eaters, the best salads do all the work of a sandwich but without the bread. Luckily, there is an abundance of protein-packed salads at nearly every catering company to satisfy all kinds of eaters at lunchtime. The popular Classic Greenz Salad at Greenz in Dallas is already loaded with chopped egg and bacon but to make it extra hearty, add some grilled chicken or steak. The Meat Platter Package at Maria’s Greek Restaurant in Miami is loaded with an abundance of grilled chicken and lamb gyro served with Greek salad just remember to ask that the  tzatziki and cheese be packed on the side so paleo eaters can bypass them. At Smiling Moose Deli in Denver, the Gluten-Free Tote Lunch is an option to hold any protein or veggie-based filling (such as beef or wild turkey) and Citrus Super G Salad, with kale, arugula, and chicken, will make a paleo’s heart skip a beat.

Anything with breading or a sweet glaze is hard for paleo and gluten-avoiding diners (teriyaki sauce is usually heavy on the sugar) so at dinner, look for grilled or stewed meats, like grilled fish or goulash. Try a la carte entrees- which allow you to separate the protein from the vegetables and other sides. At Tucanos Brazilian Grill near Indianapolis, Bacon Wrapped Turkey is a popular entrée. Order with a side of grilled or steamed vegetables from their menu. Many caterers offer a version of a taco bar, where each guest can customize exactly what goes on their plate. The Four Meat Taco Feast from Taco Circus in Saint Louis or the Taco Party at Hacienda’s Mexican Grill in Scottsdale makes a satisfying meal for all. Though the paleo diners will avoid the tortillas and dairy toppings while eating the cochinita pibil or grilled chicken, rice and beans rounds out a satisfying meal.

The range of foods available to paleo diners means that selecting foods for paleo catering does not have to be hard. By avoiding dairy, bread or breading, and most sweeteners when ordering catering, paleo diners will be well looked after and other eaters can still enjoy their favorite things. And a vibrant, in season fruit tray makes everyone happy.

Many food trends overlap and bibimbap, the Korean meal of eggs, veggies, and meat, might be your next perfect paleo catering order.