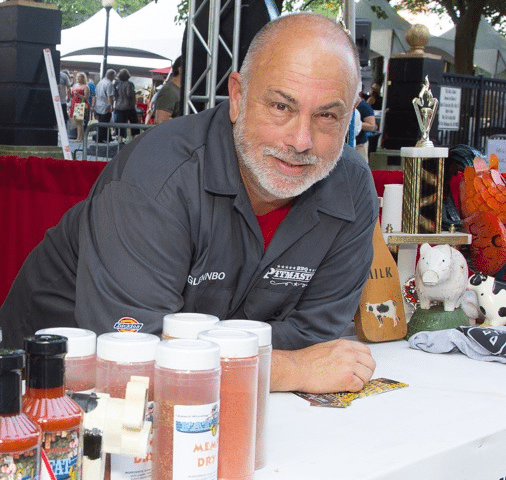 Glenn Gross has been passionate about cooking since back in the day- when he was just a kid manning the grill at family barbecues. He has got a long history in the restaurant business and has done everything in the industry from washing dishes to serving as president of a company. Most recently, he’s been running a chain of Fat Jack’s BBQ restaurants.

We spoke with Glenn Gross to learn about big barbeque and the business behind Fat Jack’s BBQ.

How did you come up with the Fat Jack’s BBQ concept?

BBQ is traditionally mom and pop, roadside stands, but my partner and I knew there was a niche.  We opened our first place in New Jersey. First it was a 10,000 square foot place. Then, in the 90’s, that turned into 5 or 6 places. Those were expensive to run, so we transitioned to street food and festivals in the 2000’s.

When did franchising enter the picture?

There was demand for a restaurant so we moved into a quick-serve format from smaller units and then franchising. After we had five franchises, my business partner and I split up the business. Right now we have six restaurants.

How did you come up with your barbecue recipes?

My partner and I traveled around the country. A lot of pit masters were closed and wouldn’t share any secrets but some did. I started playing around with a smoker, rubs and sauces. I cook the way I like to eat. I like sweet and savory, and flavors that explode in your mouth.

What are your favorite menu items at Fat Jack’s BBQ?

I love the brisket and ribs and we do some weird sandwiches that are really unique. The Texas Twister has Texas beef brisket, Carolina pulled pork and Memphis pulled chicken with mild BBQ sauce, Monterey Jack cheese, sautéed onions, slaw and Memphis dry rub. It’s 10 inches high. We do Memphis style dry rub which you don’t find as much here and we also do burnt ends which is a Kansas City specialty.

Tell us about barbecue competitions.

I started entering them back in the mid 90’s. Initially we weren’t winning but then I took a Kansas City Barbecue judges class and figured out what the judges were looking for. After that I started winning. I keep it basic in competition. I use basically the same recipes as we do in the restaurants with only a few changes and we’ve won in just about every category. Since 1993 we’ve won about 300 awards including NJ state Wing Champion, Best Ribs in Maryland, Best of Philly and South Jersey. Those are big around here.

What are the benefits of entering competitions?

Most of it is bragging rights, I don’t go just to compete. I also want to be able to sell too as a concessionaire. I set up a tent. If you win, everyone comes over to try your food. It’s not worth my time to only win a trophy and money.

There’s more competition now than there was 10-15 years ago. The trend is to scale down, a Chipotle model. That’s our next foray. We will have lower prices, serve BBQ bowls, piles of ribs, and you can pick your sides. It will be served on a tray.

What are the biggest challenges at Fat Jack’s BBQ?

Everything is made to order and takes time but customers can be impatient. I use only top of the line ingredients and that’s expensive. Ribs and brisket are not cheap. Years ago wings were a byproduct. You could get them for 30 cents a pound. Now they are $2.80 a pound.

Any other trends affecting Fat Jack’s BBQ? Any predictions?

Overall you can see what has happened with food prices. When the economy took a downturn, restaurants were closing left and right. When ingredient costs go up, you can’t raise your prices to cover that. Gluten-free is not a major issue but it’s become more of a trend. We have some things that are gluten-free and I can tell anyone who asks which items are and aren’t.

How important is radio and TV to Fat Jack’s BBQ?

We have our own radio show on Wildfire radio that we’ve been doing for a year-and-a-half: Small Bites. It airs on 6:35-7:35 Sunday nights. I’ve also been on lots of TV shows including BBQ Pitmasters. We have our own TV show in the works now too.

I get recognized in the streets and people ask for autographs just because I’m on TV. It draws customers to the restaurant too because people want to eat at places they see on shows. I make sure to always have a Fat Jack’s BBQ logo shirt or logo hat on which gets me and my brand front of how many people? I don’t know, but If I had to buy that kind of exposure it would cost a lot of money. That’s why I do it. It helps the business. I’ll never turn down a request for media.